CYBILS F/SF: AND ALL THE STARS, by Andrea K. Höst

Oh, Publishers. You need to look at this self-pubbed author, and at this book. LOOK HARD. Movie people, LOOK HARD.

Reader Gut Reaction: I am not a fan of post-apocalyptic novels. They never seem to work for me. Either there's some mega-volcano, and people cannibalizing each other the next week. (Seriously? The fall of a six-eight-ten-twelve thousand year old civilization just ... happens in a week?) Or, there's some running and dodging, and eew, blood, and then people start hooking up. Um, again, really? The world ends, and I'm worrying about my hair, and how to edge closer to some guy? Or, better still, I'm macking on some guy in a world spattered with blood and gore, yet without toothbrushes??? Can I at least chew on a mint leaf and maybe wash my face first??? So, yeah - the post-apocalypse thing: rarely does it for me. Until this one. I started reading, and ... it was like ... falling down a well. I entered the book with a soundless splash, and didn't come up 'til it was over... and I was very near tears. It was THAT GOOD.

Concerning Character: Madeleine Cost is working - the Archibald Prize requires this, and really? School is just in the way, and despite her parents' insistence on her focusing on the practical...artists have to create art. Period. The one day Madeleine cuts and goes to her cousin Tyler's house for his portrait sitting, she is in the WORST place on earth when things go wrong. Ironically, she still - after everything - feels she has to lie to her mother about where she is, when she finally gets phone coverage. See, there's been some kind of disaster... and she's not safe, not at all, and guess what? No one is coming to save her. Everyone is hermetically sealed inside, looking at her with wide eyes, and terror. The most prosaic, non-panicking, non-self deluding heroine EVER, Madeleine extracts herself from where she is, steps over the bodies (!!!) and gets a move on -- saving the collapse into hysterical tears - and any other feelings, all the way through the book - until it's safe(ish).

I love how Madeleine ...sees the world. She's an outsider, an observer, and she peeps out from behind a mask. A sketchbook in hand keeps the world at bay. She can kind of categorize people into Blonde Girl, Red-Haired Guy, Science Guy... it's as much a surprise to her as us when Science Guy turns into someone more real. I also love how Madeleine loves -- she takes her friends and makes them family; she takes her cousin, whose fame allows other people to create their version of him, and loves the him she knew as a child - who is still the same person, despite wardrobe and makeup changes. I wanted to hug them all as they fought and huddled in fear and had their hearts broken as those they loved were taken away from them.

There's a lot of love in this book - a lot of fierce, hold-hands-and-jump sort of stuff that happens when everyone's lives are on the line. Parents are far, far away... :sigh: But, I'm approaching spoilers. This was such an all-round satisfying book! Just, go. Read. 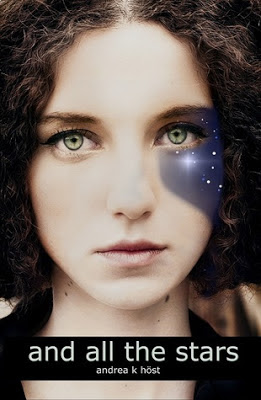 Recommended for Fans Of... : THE HUNGER GAMES, by Suzanne Collins, POD, by Stephen Wallenfels, ROT AND RUIN, etc., by Jonathan Maberry, Alien Invasion & Other Inconveniences, by Brian Yanksy.

Cover Chatter: I don't normally pay any mind to ebook covers, but this one is STRIKING.

For a person who doesn't like face-covers, for me to unreservedly like this one says a lot. For one thing, the girl's face is flawed. I don't just mean that you can see some of the galaxy under her eye, but I mean that her hair is completely out-of-control curly; it borders on full-on frizz. She hasn't over-plucked - or at least salon-plucked - her brows, and she has moles. Her face is not perfectly symmetrical. If you have to use a face on a novel cover, I think imperfect (yeah, okay, she looks perfect in that they Photoshopped pore-free skin on her, but...) faces work best. She looks real. She also looks unsure - maybe frightened. Maybe hiding everything behind a blank stare. This model matches well with the main character - she appears self-possessed, but there are Things Going On behind those eyes. I have a lot of appreciation for cover models who don't look utterly vapid.

Authorial Asides: I always find myself curious about authors who self-publish. Until I read a blog post by Sherwood Smith about her, I hadn't even heard of her - but from her novel I knew she was Australian - her sense of setting is spot-on and the casual dialogue and attitudes of her characters match my Australian friends well. On her blog she says, "I am an Australian author. I write what I like to read: stories about worlds where magic is real, women aren't relegated to the background, and expectations are twisted slightly out of skew." I like that.

You can find AND ALL THE STARS by Andrea K. Hösth (pronounced, and for simplicity, spelled Höst) at Smashwords, or at an online bookstore near you!

Posted by tanita✿davis at 1:50 AM
Labels: Cybils, Fantasy/Sci-Fi, Reviews, Romance

Color me intrigued! I enjoyed your other recent self-pub recommendation for THORN, so I may check this one out, too.