I should be ashamed to say it, but I'm not. We all do it. We judge books by their covers, even though there's a clear "don't" in that saying. And, okay - there's a reason, in this case.

I'm not a very girly girl, try as I might. If I see The Big Dress of Hopeless Foofiness on the cover of the novel, nine times out of ten, I'm out. The niecelet meanwhile will RUN ME OVER trying to get to it, and I'll just hand it to her, and say, "What? Like I'd try to KEEP that from you." The Dress of Hopeless Foofiness = Niecelet. Possibly, the Girl In Tank Top With Weapon and Tattoo = Me.

( Not that either of us have those - foofy dresses [Niecelet has refused to wear dresses since she was eleven] nor weapons and tatts [guns and needles, just...no. Sorry. I do say YES to knives, though]). Our internal landscapes lead us to our books, which is why it's so funny that today I'm reviewing a Niecelet Book, complete with geez, louise, big-old-foofy-dress. But, I was so happy to read it, because it was like a milkshake - a bit frothy, a LOT predictable - I mean, it's a milkshake, right? - but at least some flavor was there. 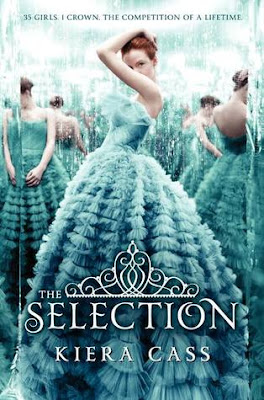 Reader Gut Reaction: Foofy. This book has its own Pinterest page, okay? Seriously foofy. And yet, I was reminded of my favorite fish-out-of-water trope when I started the story: a girl who DOESN'T want to be a princess? Who has MET her Prince Charming? Who goes in with the intent to FAIL, after a few good meals? Who prefers to wear PANTS? Oh, yeah. Bring it on.

Concerning Character: America Singer is just that - a singer in the land of Illéa, which is some subset of post-apocalypse America (no, the country, not the girl). Her family is in the class of entertainers and artists, Class 5, and it's rough - people are poor, flat out. There's not much money or time for entertainment, except in the warm summer months. Families and clans must stick together for their survival. (With the notable exception of America's poseur artist brother, who has not only moved up, but who pressures America to name-drop him to the prince. I'm wondering if there's some purpose for him, and if we'll see him again.)

It could be worse. America could be a Six, like her secret boyfriend, Aspen. Sixes are servant class, and the lowest caste there is, except for the homeless who aren't even in-caste. Not just money, but food is even more scarce for them. America sneaks him food, and they sneak time together. But all of this comes to an abrupt halt - because of The Selection. A once-in-a-lifetime application process to choose the newest queen of Illéa, The Selection is all anyone can talk about. America isn't into it, but her mother pressures her. And then, her boyfriend pressures her - and dumps her. Angry at the limited choices in her life, she goes. She is, of course, chosen immediately as one of the thirty-five finalists.

There are uses for being a square peg in a round hole. With nothing to lose, America stands to gain everything.

Recommended for Fans Of...: The Purim Story (of Queen Esther), in the Torah and in the Bible, THE PRINCESS ACADEMY, by Shannon Hale, MATCHED, by Ally Condie, DIGNITY, by Eva Caye, THE HUNGER GAMES, and any number of princess fairytales, including Cinderella, by Strabo and all the others who retooled it.

Thoughts & Things: With some of the clichéd readalike bits of THE HUNGER GAMES dress-up scenes and the basic tool-worthiness of both love interests, this isn't the strongest book I've ever read, and yet, I still was able to enjoy parts. It attempted originality with its post-apocalyptic angle. There's a war going on, with rebels and deaths and attacks on the palace. Maxon, the prince, seems to have only the vaguest idea of what it's all about, and it seems to be America who is allowing him to understand the concerns of, you know, "real people." The fact that this book, with only one volume published and two to go, is already a in the process of being a TV series makes me uneasy for it - it could get better, or it could all get a lot worse. Hard to tell how this will go!

I wanted to have more of a discussion of the sociological impact of royalty on an already poor society - there is so much history against the idea of a seriously rich monarchy and a seriously starving populace (Hello, France? Anyone?) that it seems that Maxon is kind of stupidly just going along. What happened to The U.S.? Yes, it fell, but how/why? Also, Maxon is presented as loveable, but he's so dumb. Is America - remember now, non-royal, caste-stuck entertainer - really going to be the one to Show Him The Way when she, too, is painfully naive at times? I found myself wondering, of Maxon, "Why doesn't this man have advisers, or at least, you know, duties?" When it comes down to it, the entire royalty is a teensy bit one-dimensional -- But. This is a first book - and I know that Niecelet will love it. I'll look forward to explanations on the rebels and who/what they're fighting for, how Illéa became segregated by caste - which is only something that works in one or two societies even now - and etc. There are quite a few things for the author to explore in the sequels other than big dresses.

Cover Chatter: I mentioned foofy, right? In this new and post-futuristic Illéa, apparently there are only people of the dominant culture left. Since the dominant culture in the U.S. at present is Latino, and America admits to our country being her land of origin, I'm wondering how there are no brown-skinned ladies on the cover of the book...? Just a thought.

You can find THE SELECTION by Kiera Cass at an independent bookstore near you!

Posted by tanita✿davis at 7:51 AM
Labels: Cybils, Fantasy/Sci-Fi, Reviews, Romance

Oh gosh. This post totally hits me where I live!!!! My niece is the same way! Agree on every point!

@ LinWash:Knew I liked you for some reason! ☺

Oh, that cover. I would probably have a "run away! run away!" reaction, too. But it sounds like it does fit the whole reality-show, "Bachelorette" aspect of the story. Hmm. Some aspects of the premise intrigue me, but it might just be because of my current WIP. :)