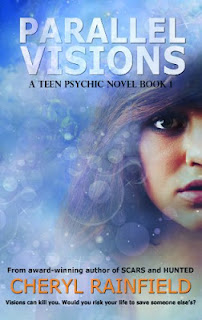 Reader Gut Reaction: My next book has psychic powers in it, and I've always enjoyed reading books about ESP and such (HUGE Lois Duncan fan, here), so I was excited to read Cheryl Rainfield's latest YA novel, Parallel Visions. I was also happy to see that it's well-reviewed on Amazon, because this one was a gripping and fast read that was tough to put down. Although in some ways I feel like it was almost too fast of a read—my reader greed (and perhaps just personal taste) made me want certain aspects of the story to be expanded upon, but regardless of that, the premise is an intriguing one: Kate is a girl who sees visions of what might be the present or even the future—but only when she has an asthma attack. As her body spins out of control and her breath begins to leave her, the visions come: a scary prospect to envision. But her visions might be able to save people, too. Kate is faced with the difficult choice of how much she's willing to endanger her own life to, perhaps, save someone else's.

Concerning Character: Kate is easy to relate to, and her asthma attacks are described with dizzying, alarming, vivid detail—many readers, I'm sure, will recognize how it feels. Though I'm not an asthma sufferer myself, I think this is a great trait for a character to have, not only in the sense of creating realism but also with respect to demystifying and normalizing asthma—it makes for a good addition to the realm of diversity literature, in my opinion. And with respect to side characters, I loved that she has a friend in Gil—one she trusts and who knows about her ability.

Recommended for Fans Of...: I think this would be a great one not only for suspense fans but for reluctant readers, too. Caroline Cooney fans, people who love the combination of suspense and problem novel (and they do tend to go together these days).

Themes & Things: Like other books by Cheryl, this one deals sensitively with the topic of abuse. This time, though, it's told not from the abuse victim's perspective, but from the viewpoint of a family member—Kate—who faces the same decisions most anyone in her situation does: When and how is it appropriate to intervene? How can we save someone who doesn't want to be saved, and what if it puts a life in danger? In Kate's case, using the one (supernatural) power she does have over the situation means considerable sacrifice. There's a lot of suspense and danger in this one, but it's also hopeful, too—Kate is brave and loyal and willing to risk a lot for her friends and family, and ultimately, even though her power is strange and dangerous, she has friends and family who stick by her, and that's a heartening thing.

You can find Parallel Visions by Cheryl Rainfield as an ebook from Amazon!
Posted by Sarah Stevenson at 9:00 AM
Labels: AF, Fantasy/Sci-Fi, Reviews, Suspense