I don't watch you anymore. You disappoint me constantly. You misspell Sci-Fi to something dumb like "Sy-Fy." You're unreliable and you cancel all the best shows -- seriously, there's just no excuse for that. When I actually want moving pictures and sound with my stories, I rely on my laptop like most people. NetFlix saves us the trouble of bothering with you. But. If you give Hiroshi Yamamoto an American TV show with lots of special effects and huge monsters, I will come back. Cross my heart. With my bowl full of popcorn, and my heart full of hope. I will come back.

You have my word. 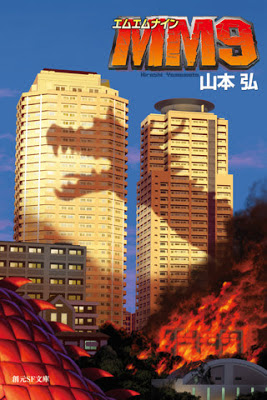 Reader Gut Reaction: I have many quirks. One of them is my deep love for Kokopelli - well, mainly, my deep love for other people's hatred of Kokopelli. Another quirk is my love for my salon scissors, with which I'm going to hack off a fun six inches of Tech Boy's hair. The third is a deep and biased love for Japan. Three of my favorite people in the world were born there, and one of them draws me scribbly pictures of water dragons on my yearly Christmas card, now that he can sort of draw. And Totoro lives in Japan. ... so, when I saw that we had two books from VIZ Media/Haikasoru Publishing. I was eager to jump in, and I was right to be. This series of interlinked short stories has a serious mien, reminiscent of watching some of the very best b/w monster movies from the 60's, with the nearly apocryphal well-dressed scientists, sentimental loners, screaming, cigar-chomping chief, and sweating, terrified geek. And the really hilariously jerky monsters who rise up out of the sea and roar. A gently tongue-in-cheek mockery of the very best in monster movies from Japan. 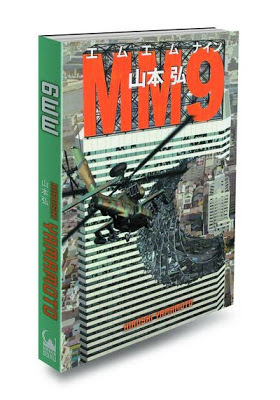 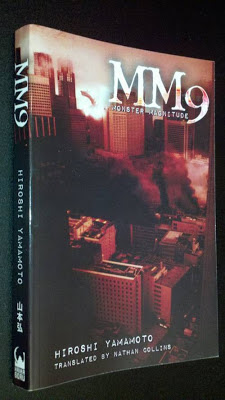 Concerning Character: Hard-bitten, serious Chief Kumihama, analytical Yojiri, and soft-hearted Yuri - these are but a few of the stellar characters from MM9, upholding the thankless task of making Japan safe. These stalwarts work for the Monsterological Measures Department, or MMD, and stand alone against the Kaiju threat. What is a kaiju, you ask? Well, you've met Godzilla, right? Sometimes larger, sometimes smaller, sometimes überhuman looking, kaiju are monsters. Unless they're a threat to the lives and livelihood of the Japanese people, they are left strictly alone, as they are relics from an earlier time. But, sometimes, when they're tromping through downtown Tokyo... well. You've gotta do what you've gotta do.

Recommended for Fans Of...: Godzilla, Mothra, and other excellently cheesy movies, monster-killer movies and games.

Cover Chatter: Of them all, I think my favorite cover is the iTunes cover - the shadow of the dragon head on the highrise reminds me of a particularly scary shadow puppet show. My second favorite is the Japanese cover, with the perfectly round bite taking out of the building. I even have a soft-spot for the American one. The dark, murky scene of a busy metropolis viewed from above is relieved only by the faraway head of a monster, peering above a high rise. Each cover has something to offer, but the American one takes the mayhem with a serious, post-apocalyptic feel, whereas the other two covers seem more lighthearted. I always thought that in the monster movies, the Japanese populace certainly took the post-atomic mutant monsters better than American people took things like, say, giant ants.

Authorial Asides: Hiroshi Yamamoto allegedly came up with the the idea from this book after an amusing conversation as to who names the monsters he'd seen in a TV show. He came up with the idea that the meteorological agency had to have done it - as they were usually the ones in monster movies to report the phenomenon. Apparently inspiration struck, and he imagined an entire agency dedicated to doing nothing else -- seeing, naming, and neutralizing these monsters. After all, everyone always complains about the gigantic monster crushing cars in the city center, but how often does anyone DO anything about it?? Mr. Yamamoto does do something about it, and what he does with them is good fun.

You can find THIS BOOK by Hiroshi Yamamoto from the iTunes store, or from Haikusora, or in ebook form. Hopefully more widely available in the U.S. soon.

Ahahahahaha! Kokopelli. (And, yes, I read that bit aloud to Josh. He responded with his fist-shaking-yelling-"TANIIIIITA!!!"-at-the-sky routine.)

AHAHA! You guys crack me up.

Seriously, though, this one sounds VERY funny. I can already think of a few people who might have to have MM9 forcibly gifted upon them.