I've got school story-itis. I LOVE and adore school stories. Boarding school stories are EVEN BETTER. I don't know why - I went to boarding school and know it to be a peculiar sort of hell, but somewhere in my head I'm still expecting to find interesting haunts in the second floor west bathroom, or maps to hidden rooms. Nope, nope, nope. I know better. But, still.

This is a school story, a military school story. I think the school bits are what kept me reading, that, and the engaging voice. It's a review I held onto for awhile, ambivalent about the book and unsure I should post it - but, whatever. Sometimes you just have to write about enjoyable books with plot holes, so here goes:

Reader Gut Reaction: This story started off with a character who was both funny and awful - and in an awful position. I'm always rooting for the underdog, so that hooked me. And then when there is a school in the offing, a tough girl, and Things Not Being What They Seemed I was definitely in. This novel is flawed and slightly readalike for a few written in the past several years, but I like that it has a male protag who is blind in some predictable ways - but it remains my hope that, with the remaining volumes left in the series, that there is redemption for this character. A lot can change in a book, if the main character is allowed to open his eyes...

Concerning Character: Presenting Tom, underdog, downtrodden, bitter and fronting. He's intimidated by the world in which he lives, and yet contemptuous of it, as he sharps and hustles and slides to stay alive. Goodness knows he has to; his father, once a brilliant man, is a well-known gambler, and entirely a mess now. Tom - short, pale, spotty - does what he must, he tells himself. He listens to his father's paranoid rants, skips school, and becomes an amazing gamer as a way to make money. He has inherited his father's brilliance - which causes him attention he's not sure he wanted. His father is POSITIVE the attention is unwelcome and unwarranted, but all Tom can see is what they're offering him - a place to belong, steady meals, and the attention - maybe even the friendship - of a girl...

I don't even have to tell you that All Is Not What It Seems. You get that automatically, right? 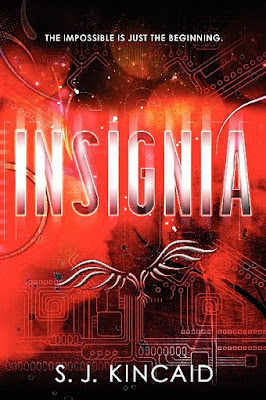 Recommended for Fans Of...: READY PLAYER ONE, by Ernest Cline, ENDER'S GAME, by Orson Scott Card, DIVERGENT, by Veronica Roth, and the very awesome HEIR APPARENT, by Vivian Vande Velde.

Themes & Thoughts: A little disclosure: I love The Book Smugglers. I read their reviews on everything and generally lurk around their site. I read Ana's review of this book for Kirkus, and can see her points - but I want to say that I was not, I don't think, unduly influenced. See, if you read this novel critically, you'll see that there are holes. Holes you might be able to get past - the voice is engaging, and there's a lot to like - but that's up to you.

Some of the holes were obvious - you would think there might be greater computer security at this school, seeing as everyone is so into computers, to the point of having one onboard in an android fashion. There were some hazing scenes that surprised me - and other problematic fixations in this book on little things - wrong little things that never really get resolved. ****MINOR SPOILERS****

Okay, the "man-hands" girl gets a boyfriend she isn't sure she wants... and that solves her issues? Is a man the key to her confidence? And, okay, Tom finds a way to bring down the enemy - but it's not through superior plotting and his super-brilliant intellect. No, it's because of a specifically feminine fear. Um...in whose dreams?

The character arc that includes growth and coming to grips with things? Is kind of missing. From everyone. Especially in light of the conversations going on in the gaming world about the role and the reactions to female gamers, there is some stereotype dependence and some missteps here.

I'm going to go so far as to say the issues raised made parts of this novel anticlimactic and disappointing. This story is written in an easy and engaging style, which leads me to hope that there can be some course corrections in the plot and characterization - I believe it's supposed to be a trilogy, so a.) maybe this was deliberate and b.) maybe there's time to fix it?

Cover Chatter: I can appreciate very much that the book designers avoided faces on the cover! The cover color is striking, the sort of formal coat-of-arms/school insignia was a wise choice to go with. Apparently this kind of cover is what book designers feel appeal to boys - strong colors and simple designs. *I* like it, and hope to see more designs like it.

You can find INSIGNIA by S.J. Kincaid online, or at an independent bookstore near you!

I just read this book last week. I'm mixed about the en, because I really don't like what Tom did to Medusa, but I also would have hated it if she'd spent the whole book being built up as the most amazing of the fighters and then inexperienced Tom defeated her.

I disagree that Wyatt's confidence came from her new boyfriend. The way the book present it, her confidence began when she started beating everyone at the programming fights.

Fun book with some holes.

@ Anon: True - I concede that Wyatt was confident because she was able to raze everyone else to the ground. However, she could have done all these same things before, yet she did... nothing. I just hate even a whiff of a link between a girl's power and desirability.