Ah, YA lit. How I love your twists and trends.
Shrugging on capes and dimming down their sparkles, we exit vampires, at long last.
Enter angels, various transforming fey, unicorns, and ...mermaids?

We don't have a lot of male voices in the mermaid thing.
As a matter of fact, mermaids are even kind of ... I dunno, girly. Despite Poseidon and his trident, the most enduring idea of sea-people seem to be the sirens... thus, most of YA lit deals with a girl and her fin-affectation. However, that this book goes "guy" and can still riff off of the typical mermaid lore with a great voice - realistic guyspeak - as well as true-to-life bro-interactions, muscles, and a lot of testosterone - these things will make this one a win for guys and girls.

Don't be afraid to take this one to the pool: it's got lifeguards, water, and mermaids, er, men. Merpeople. Sheesh.

Reader Gut Reaction:One thing you have to say for mermaids - they've had a lot of press. If I simply say the phrase, "Under the Sea," even though of you who never suffered through primary-colored Disney fare still have a horrible little calypso earworm going on in your head, right?

Yeah, sorry about that.

Zoraida Córdova is doing for merfolk what Holly Black did for fairies, yo.
Forget Ariel and that crab Sebastian. There's a lot of vicious out there, rolling in the deep...

(Yeah, now you've got TWO songs in your head. I did that for YOU. To get the first one out...

Probably it's too late to apologize for that, right?)

He's not stupid, no. But, he's just not deep, all right? Woman of the moment. Urge of the moment. "Bros before babes," and all that pseudo-deep pseudo-manliness that goes with it. Except for his place on the swim team, and his friendship with his best-friend-since he was tiny, to Tristan, most things aren't worth hanging onto even for a day. His friends call him "manslut" without exaggeration. His girlfriend of the moment professed undying love at a bonfire - and about a half hour later, he was swapping spit with some other girl. 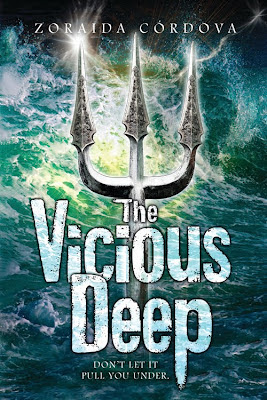 But, when it comes down to it, he delivers. A killer wave comes up on Coney Island, and he grabs his lifeguarding gear and swims into it, not away as everyone else is doing, trying desperately to save a drowning victim. And, when he gets thrown up on shore, three days later with a bit missing from his memories, he's not just This Guy anymore. He's THAT Guy. The one who survived, when everyone else died. The one whose tail just... manifested... in... the... bathtub...

Yeah. And about those dreams he's been having? About a silver-skinned girl with shark teeth? Something about her might kind of be a problem...

Cover Chatter: Well done, design team!
That is all.

Okay, not all, it's just a REALLY sharp design - no stock photo boy body to ogle (and some of you may be grieving over that, so sorry), no attempt at the mer-tail, nothing but the water and the trident - and its sharpness and the glint of light from the tip remind us that it's not just something that Poseidon holds - it's a weapon, and a freakin' effective one, at that. The rough edging of the title font against the backdrop of the roiling waters let the reader know that Something Is At Stake. It's not all eye-candy and lifeguards around here.

Authorial Asides: I don't often include book trailers, because they are not all created equally. In this case, the music is by a relative of the author - and I thought it added something.

Zoraida Córdova - pronounced zor-EYE-duh - is an Ecuadorian author who came to the English language by way of watching The Little Mermaid and Michael Jackson's Moonwalker over and over. She grew up in Jamaica/Hollis, Queens, which means she has many more stories to tell.

You can find THE VICIOUS DEEP by Zoraida Córdova at an independent bookstore near you!
Posted by tanita✿davis at 5:50 AM
Labels: Adventure, Fantasy/Sci-Fi, Guy Appeal, Reviews

Heh, my grandmother grew up not far from there, in Queens Village, though she was born in SF.

This one actually sounds intriguing, though I'm not normally drawn to mermaid fiction.