Monday Review: BIGGER THAN A BREAD BOX by Laurel Snyder 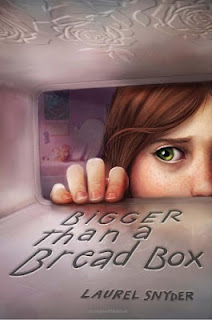 In the fall, I helped celebrate the release of Laurel Snyder's Bigger Than a Bread Box by posting a story about my own parents' divorce and participating in a rather serious blog tour. And, I confess I read the book a couple of months ago, but I haven't yet had time until now to write up the review. My blogging is a bit slow and after-the-fact these days, but better late than never!

Reader Gut Reaction: I must admit, I had two very distinct reactions to the premise of this book. The jaded adult in me thought, skeptically, "A breadbox that grants wishes? Hmm...", while the child in me, devourer of magical worlds, voracious reader, eager to believe, went, "Ooooh! Magic breadbox!" Good thing the kid won.

By turns funny, touching, and even a little scary, this is far from being a dry, moralistic story about dealing with divorce or a feel-good, saccharine, wishful-thinking escape fantasy. Instead, it doesn't pull punches about how tough it is for kids caught in the middle of the breakdown of their parents' marriage. It's far from a worst-case-scenario—you won't find harrowing custody battles or anything like that. Rather, it focuses on the quiet, internal wars that leave us lonely and grieving, and on learning when to look inside ourselves for answers and when to look outside ourselves and ask for help. And it's got a good dose of fantasy and a little suspense to boot.

Concerning Character: Rebecca is twelve years old when her parents separate, and one of the most difficult things about it is the literal physical separation—she and her mother and little brother move unexpectedly to their Gran's house. As if leaving her father weren't enough, as if it weren't enough just feeling mystified, upended, lost and angry, they've gone from Baltimore to Atlanta, a different city in a different state. Rebecca starts at a new school, and has to figure out who she is all over again. Her emotional struggles are realistically complex, and her overwhelming need to find answers and try to wish her way out of her difficulties was wrenchingly recognizable.

Recommended for Fans Of...: Stories with a magical or serendipitous element along with realistic character development and a strong family theme, like Wonderstruck by Brian Selznick (reviewed here); Darius Bell and the Glitter Pool (reviewed here), and even City of Spies (reviewed here).

Themes & Things: Sometimes confronting your demons and difficulties is the only sure way to escape them. You can't always run away from them, or wish them away. We are reminded of this throughout Rebecca's story, whether she's feeling the wonder of being able to ask for anything she wants—as long as it fits in a bread box. Of course, the things she really wants, deep in her heart, are as immeasurable as the sky. This theme, and most of the others in this book, are poignant and bittersweet, like the realization that your parents are people who are far from infallible and who make their own mistakes, and that we are all struggling and yearning for happiness and sometimes our attempts to reach it are fumbling and imperfect. In the end, though, love and hope and honesty—with oneself as well as with others—can help us through some difficult times, even when optimism seems impossible.

Authorial Asides: Laurel Snyder is a longtime blogger and part of the Kidlitosphere and entertaining Twitterer and all-around lovely person whom I hope to meet someday—DO go visit her blog.

You can find Bigger Than a Bread Box by Laurel Snyder at an independent bookstore near you!
Posted by Sarah Stevenson at 8:00 AM
Labels: AF, Fantasy/Sci-Fi, Magical Realism, Middle Grade, Realistic Fiction, Reviews

Lately, I've developed a new appreciation for middle grade books. I've read some good ones and I look forward to reading this one. I had it on my wish list and wondered about it.

I don't read nearly as many MG books, but there are some really outstanding ones. I enjoyed this one quite a lot!

Heard some really good things about this novel!