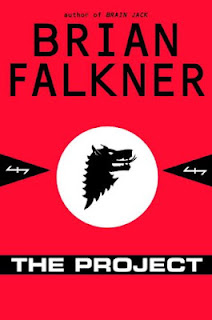 I've enjoyed Brian Falkner's other books--Brain Jack (reviewed here) and The Tomorrow Code (reviewed here)--so I was looking forward to this one and hoping it'd be another fast-paced book of intrigue and suspense and just a little sci-fi. It did not disappoint.

Reader Gut Reaction: Though this one was more of a light, quick read than the other two, it was no less of a page-turner, and had the same constant, non-stop action I now expect of Falkner's books. There's always a mystery at the heart of his stories, and this one concerns a book. Not just any book, though. It's THE MOST BORING BOOK IN THE WORLD. And, for some reason, Luke has discovered the most boring book in the world RIGHT IN HIS LOCAL LIBRARY. Now, obviously this might not be the most exciting discovery (har har) but the book is mildly famous and, to someone out there, it's worth millions. And, turns out it's got a connection to Leonardo Da Vinci. Intrigued, Luke decides to go back to the library and get it, but he finds out he's not the only one with that plan. Shady doings are afoot, and suddenly he and his best friend Tommy are caught in the thick of it. (Reviewer's note: I was mildly concerned this might be a Da Vinci Code Lite, but not to worry--it ain't.)

Concerning Character: Luke is a pretty typical small-town kid in some ways. He's smart, but not a huge fan of school. He and Tommy are inveterate pranksters. He's relatable and funny. Less typical is that he's fairly new in town, compared to the kids who were born and raised there. He's originally from New Zealand. And he's got an astoundingly photographic memory. Of course, this memory ends up being key to helping him not only solve the mystery of the most boring book in the world, but also to keeping his butt relatively unscathed. His friend Tommy is an engaging sidekick with a key role of his own--his propensity for collecting dubious and quasi-legal investigative "toys" is allegedly explained by his desire to become a spy for the CIA one day. So of COURSE they will get into real trouble when said real trouble appears in their backyard.

Recommended for Fans Of...: Investigative stories with a lot of humor and suspense, like Alan Gratz's Horatio Wilkes mysteries, Cold Case by Julia Platt Leonard (reviewed here), or The Dark Days of Hamburger Halpin by Josh Berk (reviewed here), and books in which the protagonists must rely on their skills and wits, like John Marsden's Tomorrow series.

Themes & Things: This one's a pretty straightforward thriller, and as such, it's more plot-driven than anything else--and that's not a criticism. But thematically you'll also find that it's a satisfying friendship story, and one in which questions of conscience and accountability run strongly throughout: if you knew someone was doing something wrong, what would you do about it? Is it okay to do something illegal if it means saving the world--do the ends justify the means? Would you put your own life in danger, or those of your friends, on the slim chance of saving everything that you hold dear?

You can find The Project by Brian Falkner at an independent bookstore near you!
Posted by Sarah Stevenson at 2:37 PM
Labels: Adventure, AF, Guy Appeal, Mystery, Reviews, Suspense

@ A.F. ~ I have to read more thrillers and such - I am not at all sure how to balance the mystery/danger aspects, but I like the "recommended for" books enough to know I'd like this one.