Interest in steampunk has been divided of late; the diehards are still into it, and everyone else wants to play Tribute and run around with a bow and arrow. Never mind. Those of us who were into it are into it still, and looking for stories and plots worthy of our time.

I think we've found one.

Reader Gut Reaction:Steampunk is ideally set in the 19th century, that is, within the age of steam. Most authors get at least that much right. Few authors get the 19th century dialogue down properly. Ms. McQuerry does. There's atmosphere, the slow pacing, the frittering of worries about status and position and reputation (sometimes the main character will make you want to scream - such a circumscribed life!!). There are gloves and pelisses and cross-continental travel by train. There is longing and hope - all muted by the repressive social mores of the day. The author has set the all the hopeful (wo)men of science, with their tinkering and gears against the proper background, and here they shine.

Concerning Character: For her eighteenth birthday, Lena Mattacascar has purchased her freedom. A bequest from her father - who left when she was five - allows her the monetary freedom to leave the rigid and few comforts of the home with her mother and Nana, both of whom constantly worry at her and over her - and leave the civilized world.

But, where is a gently bred young woman going, on her own? To the wilderness borderlands and then onward to Scree, where her outlaw father lives. Her outlaw goblin father, that is. From her freakishly long digits, complete with the extra joint, to her strangely long, delicate feet, Lena is an original. Different, however, is something to be kept silent, tucked away, and hoped against. Lena is tired of shrinking, tired of living a half-life. She wants to be noticed. She wants -- a beau. A home. A life.

She wants to find out if her father is like her, if he is, in fact, and evil and soulless creature, as she's been taught that all goblins are. Lena wants to know if her blood has doomed her before her life has really started.

It is a righteous quest -- and on her way, Lena is thrown in with strangers of all circumstances. Jimson Quiggley is traveling her way - and he plans to work as a librarian in Scree, for a famous and wealthy inventor and recluse, the owner of Zephyr House. A marshal, Thomas Saltre, boards the train in pursuit of a train robber who escapes dressed as a nun. Almost everyone she meets has an interest in her - but what does their interest mean? Is there any way to tell what other people think of you, when you're not sure what you think of yourself?

Eventually, Lena has to face the truth about herself - and decide what to do next. 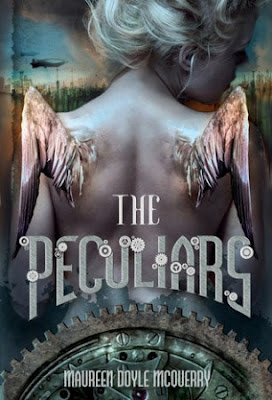 Recommended for Fans Of...: Jenna Starborn, by Sharon Shinn, Leviathan, by Scott Westerfeld, The Monstrumologist by Rick Yancey, The Girl in the Clockwork Dress by Kady Cross, the Infernal Devices by Cassandra Clare, and Mortal Instruments series by the same author.

Cover Chatter: Every steampunk novel must have gears on the cover.
This is in The Rules.
This novel has both gears and a dirigible and strange mutations! And a funky, worked-metal font with yet more gears! See their enmeshed little teeth!
(Wo)Men of science, we have a steampunk novel.

Authorial Asides: I was surprised to learn that the author, Maureen Doyle McQuerry is a poet as well as a writer, and is often published in Southern Review, Atlanta Review and other literary magazines. Her poetry shines through her prose, as she sets the stage for her tale, and her scholarship shows through her researching of time, imagination of place, and in her characterizations. Each steady word and phrase creates a perfect foundation for the next.

After May 1, you can find THE PECULIARS by Maureen Doyle McQuerry everywhere, including at an independent bookstore near you!
Posted by tanita✿davis at 5:46 AM
Labels: Fantasy/Sci-Fi, Reviews, Romance, Steampunk

Ooooh, I think I must read this. I am not properly versed in all things steam punk, but you've tantalized me... And I do love decoding covers--now I know The Rules for SP.

@ Ashley ~ I was surprised by how well I liked it - the author's poetic background and research made the difference in this one.

This sounds like a fun one--steampunk AND fantasy. And I do love that font!