THIS WAS FIRST PUBLISHED FEBRUARY 14, 2007: How ironic that not much has changed, and yet so much has - and I STILL need to hear all of this again.
Maybe you do, too...

For my Valentine's Gift today, I got a note from my agent telling me that yet another house has passed on my second novel. I just sighed and sort of wandered away from the computer, deciding it was time to raid my stash of chocolate chips again. 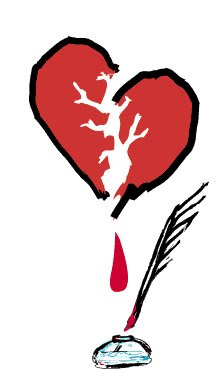 There's a part of me that just knows I'm going to be called on to revise this manuscript -- again, and right now, I just can't even think about it. I have a semi-solid mid-March deadline for the piece I'm working on now (before ye olde Agent, S.A.M., goes to Barcelona for the Book Faire), and I'll soon be doing final edits on the first novel, so there's a big "Noooo!" swelling up from my soul at the idea of going backwards yet one more time to mess with this piece. I've heard it's too dramatic, too this, too that, but everyone loves the writing, loves the way it deals with "sensitive subjects." All right, then... can anyone be more specific about what they don't love, then?

A trip to Our Jane's Brain has cured me of my tendency to pout, though. Well, not entirely, but work with me, huh? Jane Yolen spoke at the SCBWI Midwinters Conference in NY, and this is some of what she said, as recorded in her online journal:

"If you enter into revision angrily, hating the editor and all of her notes, you will get little out of the process. So learn to love the process as well...

"Read the letter, put it down, and re-read it again the next day. Call a best friend and read the letter to her or him. Or take a hot bath and let the water soak away that initial anger, which—after all—is just the body reacting to being thwarted in the age-old desire to be loved unconditionally.

Mothers and fathers, grandmothers and grandfathers can love you that way. An editor has better things to do with her time and your manuscript."

And incidentally, so does your agent have better things to do with their time! I have wasted a lot of time repeatedly allowing myself to become emotionally flayed by a guy who is really only doing his job on my MANUSCRIPT, not ME (oh, why is that still so hard to separate the two?).
Granted: rejection stinks. I still HATE hearing him say "No" and his gift for dry understatement in his pithy little margin comments initially brings me to hives -- or worse -- until I set his note aside for awhile. Writers just live too far inside of their own heads sometimes, and rejection in any form sometimes feels overwhelming. But when I'm sane (and when is that, exactly?) I know it's really not personal. Really. And though I may never feel comfortable with him, I know my agent knows his stuff. I think highly of him professionally, so maybe... maybe the fact that we'll never name our (non-existent) children after each other... well, maybe that's okay.

For Valentine's Day, I bequeath to myself the gift of realism: not everybody has to be best buddies.

All right, enough navel-gazing nonsense. Back to work...
Posted by tanita✿davis at 5:47 AM
Labels: Dear Author, Weekend Word, Writing Daze

Well, I was just GRUMBLING over my advisor's revisions to my WIP and here I turn to your blog and find this. Sigh. I needed to read this. My attitude could be better!

Yep, yep; was SHOCKED by how much this was nail-on-the-head time for me, and I wrote it so long ago!! Woe, am I ever going to be in the same stage of writing development!!?!

Hey, we all need to be reminded that the stings of revision!--and I know those pithy little comments from S.A.M. well--do finally have a pay-off. I have been trying to forget about what's painful in that stage since books 1 & 2 sold together. One of the hardest things about working on 3 is the fear that there will be that long shop-around process. Fingers crossed that S.A.M. and CRLab love it...

And if not: I'll be back to re-read this post!

I'm still in the pre-revision stage for my next novel...and trying to psych myself up for whatever my editor might have in store.