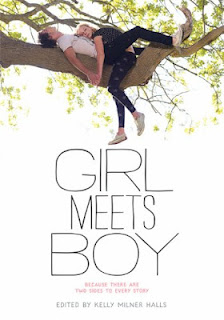 Out from Chronicle Books earlier this year, Girl Meets Boy is an anthology of he-said, she-said stories from a selection of YA authors you already know and love: James Howe and Ellen Wittlinger; Rita Williams-Garcia and Terry Trueman; Chris Crutcher and Kelly Milner Halls; Joseph Bruchac and Cynthia Leitich Smith; Terry Davis and Rebecca Fjelland Davis; Sara Ryan and Randy Powell. You'll get the girl's viewpoint AND the guy's in each set of stories, whether there's a happy ending, a sad one, or something in between.

Reader Gut Reaction: This was a fun idea to begin with, and one that was well executed all around, though I don't necessarily gravitate toward "love stories" as such. But I was struck by the high quality of every single story in the collection, and it made me happy to see an addition to the oeuvre of short story anthologies for YA readers. Also, I'm a sucker for collections that follow a related theme, and Girl Meets Boy does just that while also maintaining a wide variety of characters and authorial voices. It's got surprise twist endings and painful moments, longing from afar and love from unexpectedly close by, dangerous love and safe love, same-sex relationships and interracial ones, unlikely pairs and couples destined not to be together after all.

Concerning Character...and Theme: Obviously, in a book like this, character is going to be a critical focus—it's what makes that centuries-old, infinitely-rehashed theme of love into something new, individual, never seen before. And every single character in this book was vivid and distinct, brought to life in just a few pages. So I'll just relate a few standout stories here. One of my favorite pairs of stories was the Bruchac/Smith pairing—the voice was so strong in both, whether it was Cynthia's Native American basketball star longing for something more than just a clumsy pawing by some oafish dude, or Bruchac's short, thoughtful martial artist who's just a little scared to make that leap into the unknown territory of love.

I also was struck by the interracial love story by Terry Davis and Rebecca Fjelland Davis, because it's the story of a Muslim, Bangladeshi boy in—of all places—rural Iowa, in love with a local girl who is obviously neither Muslim nor South Asian. Issues of race and religion were sensitively handled, but the focus is on the fact that love (and, of course, physical attraction) transcends any boundaries we finicky humans might invent. This one also appealed to me on a personal level, because my grandfather—my mom's dad—and his family originally hailed from Iowa, and I remember being a little kid, visiting Iowa with my parents and having the Midwest relatives mentioning how "exotic" my dad and I were. However, Rafi's got the added difficulty of living in a post-9/11 world, and the difficulties that attend that are not sugarcoated.

Lastly, I want to mention the story by James Howe and Ellen Wittlinger, mainly because Howe wrote a few of my ABSOLUTE favorite books as a kid--Bunnicula and the sequel, The Celery Stalks at Midnight. But here, he writes about a lonely gay teen who meets his soul mate over the internet...or so he thinks. I can't talk too much about it without giving things away, but he's in for a surprise when he finally meets Alex in person.

ALL of these stories are great, though. I could go on about each of them, but I won't—you'll have to explore each gem on your own.

Cover Chatter: I think this one's got a really nice cover. It's simple but eye-catching, the image itself is visually striking with the teens' legs nicely echoing the crooked branches, and (at the risk of sounding like a design dork) I really like the title font.

You can find Girl Meets Boy at an independent bookstore near you!
Posted by Sarah Stevenson at 8:00 AM
Labels: AF, Multicultural Fiction, Realistic Fiction, Reviews, Romance, Short Story Collection

I think I have to add this to my To Read list.