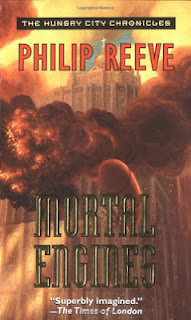 I really enjoyed reading Philip Reeve's 2010 novel (and Cybils SFF Finalist) Fever Crumb, with its post-apocalyptic feel and its enigmatic main character. Little did I know that Fever Crumb was actually a prequel to Reeve's first novel, Mortal Engines: The Hungry City Chronicles #1. In fact, Mortal Engines was an impulse grab from the library shelves, and, I must admit, one that intrigued me in part because of some similarities it bears to my current work-in-progress—COMPLETELY serendipitous and coincidental, but intriguing nonetheless.

Reader Gut Reaction: One of the things I liked about Fever Crumb was that it had an appealingly steampunk sensibility without really being steampunk—in fact, it takes place far in the future, not in an alternate Victorian past, and so, too, does Mortal Engines. (And, uh, so too does my WIP.) While the premise is just a tiny bit farfetched, I was willing to indulge in the fantastical setting because it was just too cool: in this future time, the world is a post-apocalyptic wasteland, and in order to acquire the resources to keep running, cities have gone mobile. And not just mobile, but carnivorous. Large traction cities like London, where Tom Natsworthy the lowly apprentice lives, roam about the wastelands on colossal treads in search of smaller, feebler cities to capture and dismantle for their raw materials.

When Tom fortuitously saves the city's Head Historian from a mysterious and disfigured assassin named Hester Shaw, he finds himself not rewarded for his bravery but tumbling down a chute and out of the city after her, where they must cope with one another and with privation and hardship in the Out-Country. Tom soon finds out that the world is far more complex than he realized working in the depths of the History Museum, and the authority figures he's been taught to revere have nefarious plans of their own. As he tries to catch up with his moving city, it becomes clear that he may be the only one able to save it from hurtling headlong towards danger.

Concerning Character: Tom is an appealing character—bright and ambitious but still humble and kindhearted. In fact, it's his kindheartedness that gets him into trouble, and makes it difficult to know whom to trust. Unfortunately, sometimes he has to find out the hard way. And he may be bright, but his wits might not be enough to save him out in the wasteland of the Out-Country. Luckily for him, his survival is aided immensely by Hester Shaw.

At first he's loath to trust the frighteningly disfigured young woman who tried to kill his intellectual idol, the Head Historian, but soon realizes that his survival may depend on her, and he learns that the man he put on a pedestal may be hiding some terrible secrets. These secrets are so long-buried that even the Historian's daughter Katherine doesn't know them—in fact, to her, Thaddeus Valentine is dear old dad, and enables her to live a life of ease in one of the Upper Tiers of the city. Katherine also has her part in the story, however, and the tension builds as she and Tom make their respective shocking discoveries and realize what they must do to save their beloved London.

Recommended for Fans Of...: Steampunk that borders on the fantastical, like Scott Westerfeld's Leviathan series. Post-apocalyptic adventures like Blood Red Road by Moira Young.

Themes & Things: TRUST is a huge theme in this book—whom to trust, and whom not to trust. Betrayals of trust, enemies who are really friends, and friends who perhaps shouldn't be trusted quite so blindly. It keeps Tom on his toes, and the reader, too. I ended up constantly being nervous on his behalf, lest someone he encountered turn on him. Another major theme is having the strength and personal fortitude to do the right thing even when it means betraying someone you love or admire.

You can find Mortal Engines by Philip Reeve at an independent bookstore near you!
Posted by Sarah Stevenson at 4:57 PM
Labels: Adventure, AF, Fantasy/Sci-Fi, Guy Appeal, Reviews, Steampunk