The immigrant experience is not for the faint of heart. Merely living abroad in one Western country instead of another has produced misunderstandings, depression, and wry amusements.

I cannot begin to imagine the immigrant experience when coupled with the displacement of a war.

Terry Farish has not only imagined it, she's written about it multiple times. She is a literary evangelist for newcomers to American shores, thus has an unique perspective. She blogs at The Elephant Rag, a blog exploring multicultural literature.

“ The Good Braider is a masterful triumph of character and story. Terry Farish’s Viola – strong, frank, tenderly wistful, and brave – is so expressive and endearing, that you will never encounter a refugee from anywhere without remembering Viola and her family. This is a novel of deep understanding and unforgettable empathy.” – Naomi Shihab Nye

Reader Gut Reaction: Can a work about a postwar diverse population be written by someone who has neither lived in a war nor is a member of that diverse community? In this case, yes. Though at times I struggle with first-person narratives about lives from multicultural nations encountering, for the first time, American soil, this novel works for me because the author has studied her subject. The voices ring true, as well as the situations. Without her advocacy, would these characters have a voice? Maybe. But, with her, they have a very certain voice, and the larger community needs these stories.

Perhaps, if we keep listening, and understanding, we can make the transitions easier, and our nation more welcoming to those from abroad. If nothing else, we can begin to understand what America looks like from the outside - and how quickly a land of promise can turn into simply a continuation of long-ago pain...

Concerning Character: Keji - or Viola, her Christian, name - is a Sudanese girl who has seen the world as nothing but a place of fear. Living with her grandmother and her mother, eking out a simple existence, caring for her small brother -- and avoiding going anywhere alone, avoiding groups of soldiers, avoiding sharing space with a young man. The invading armies are Muslim - or so they claim. And yet, their faith takes a backseat to their viciousness; everyone moves silently and in fear, and they are brutal - relentless. Viola keeps herself modestly covered, in drab colors, and keeps her eyes on the ground -- but this doesn't save her, or the boy who tried to protect her by claiming her as his sister. 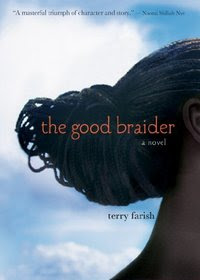 Once a good braider, Viola has lost faith in herself, and in her place in the world. Her bride-price - what made her worth something - is gone, even her mother says so, and so she leaves her hair is a snarl of curls, covering over the broken, tangled ends with a scarf. It's hard to care about her body when it feels her souls is gone.

In Violet's life, there are too many losses.

And then, having escaped to Cairo, and then, onward to Maine, Viola finds herself a stranger in a strange world - she finds school to help her survive, and in time, makes a few good friends, but her mother is angry and mute, and the misery of their truncated household winds tighter and tighter and tighter -- until something breaks.

The language of the novel is spare, the violence bleak, but the story rings true. And, in the end, America offers hope, not because of what it is, but because of who - the immigrants - who it is that lives within it.

This is a story of courage - not just Viola's, but of all immigrants.

Recommended for Fans Of...: Stylistically, this novel reminds me of Sold by Patricia McCormack. An Na's A Step From Heaven, and First Crossing: Stories about Teen Immigrants, edited by Don Gallo, and
Beverley Naidoo's, Out of Bounds: Seven Stories of Conflict and Hope round out a decent reading list.

Cover Chatter: The cover of this novel goes beautifully with the tale. A limitless blue sky, a knot of braids at the base of a long, graceful neck - the image epitomizes beauty and promise.

While many African American communities braid hair, I hadn't known that it is held in such high regard in Sudan. The intricacy of the braids, the narrowness and style means something. It is a mark of honor to be known as A Good Braider. Once upon a time, Violet's mother was such a woman. Violet herself hopes to be known as one.

It is pride, honor, and a place within the community. Being a good braider can make all the difference in the world...

After May 1, you can find THE GOOD BRAIDER by Terry Farish everywhere, including at an independent bookstore near you!
Posted by tanita✿davis at 9:32 AM
Labels: Ethnicity and YA Literature, Multicultural Fiction, Problem Novels, Realistic Fiction

This sounds a bit depressing, but also really interesting and important. And I love love love the cover! Thanks for the review - I hadn't known about this book.

It is not an easy book, but it is important, indeed.

I'm always intrigued by immigrant stories--particularly the 1st and 2nd generations--and there really aren't enough of them, considering the fact that so many Americans either are or were immigrants or have immigrants in their families.

I'll look out for this one.