It's officially Spring. Means it's time for a band novel.

Not as many of these crossing my reading space these days, and when I saw the punky cover on this one, I had to smile.

"What drew you to it?" CitySmartGirl asked me curiously.

It's just ...something. The fact that I think that people who punk are creative and brave and revealing something - maybe nothing much, but a corner of themselves that otherwise people keep hidden.

The novel has some tiny imperfections - sometimes the love interest seems WAY too good to be true, and that Amanda and Jenn couldn't discuss their problems, oh, the next day seemed to be out of character for best friends to me, but then, what do I know? The voice is harshly self-deprecating and spot on, and the wrenching decisions made work.

Reader Gut Reaction: If you're looking for a great summer read, look no further than this one. Each chapter begins with a quote by Salvador Dali, the main character's artistic hero. The steady theme of self-discovery and finding your way comes across clearly, with no preachy overtones. A good beach read, and a good excuse to do some heavy thinking about the future, with good lyrics and a throbbing bass line.

Concerning Character: Actually, her name is Amanda, but her mother calls her "Amy," her father calls her "kid," and her best friends call her Zero. That's how she thinks of herself. To her mind, she's too fat, too plain, too boring, and only a hopeful, in terms of being an artist. Unfortunately, all of this seems solidified when she gets a scholarship to an art school -- only to have them rescind their invitation, because her work didn't show the technical brilliance they were after. They gave her opening to someone else.

And then, some STUFF happens with her best friend, and she can't talk to her anymore.

So. Dreams gone, best friend out of the picture with some major awkward 'splaining to do, well, then, obviously that's the time to go find new dreams and new friends, yes? And yet, Amanda can't make herself move. She can't lose herself in her art, either; at home, her Dad's drinking and her mother's screaming at him drive her halfway up the wall and across the ceiling. 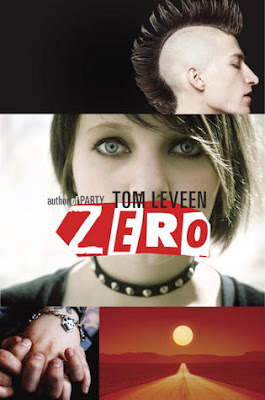 Recommended for Fans Of...: Struts & Frets by Jon Skovron, Lemonade Mouth by Mark Peter Hughes, King Dork by Frank Portman, and Heavy Metal And You by Christopher Krovatin. (Wow. Male YA writers, all.)

Themes & Things: Is there any such thing as a "typical" band novel? No, not really - but, yeah. There are elements. This is an atypical novel - in that some of what you expect doesn't happen, and some of what you are sure shouldn't happen, does. And yet, it works. Thematically, this novel is about getting your stuff together and living the life you're supposed to have. It's not just the young adults in the novel who have to do that, either - it goes for everyone. In a subtle and spare fashion, the author lays out the truth: life is what you make it. If, within this culture of perfectionism and "rah! rah! achievements!" you fail, what matters is getting up off of your tush, and trying again.

Cover Chatter: I already mentioned how much I liked the mishmash of black spaces with the white and contrasted with the color-leached and pale face of the cover models; they appear almost black-and-white in contrast to the drenched shades of the desert. The blocky/bold font for the title works well, too. The design team could have done any number of things, taking the title character's artwork into account or any number of things, but I like this - the hands linked are not just a hint that there's a love story, but they're also a bit about holding on -- to those we love, to those we need to keep, and to those who keep us grounded. Things go better with a friend to hang onto.

Today! April 24th, 2012~ You'll find ZERO by Tom Leveen everywhere, including at an independent bookstore near you!
Posted by tanita✿davis at 7:58 AM
Labels: Guy Appeal, Realistic Fiction, Reviews, Romance

That cover is pretty eye-catching--I like that the "Zero" goes across her mouth. Very evocative!

"life is what you make it. If, within this culture of perfectionism and "rah! rah! achievements!" you fail, what matters is getting up off of your tush, and trying again." That is a theme that can't be explored often enough, whether you're a YA or an adult.