It is just not often that I come across a book which defies description.

On a nudge from a mutual friend of Melissa Wiley, I requested this ARC from NetGalley in March, and immediately dove in. It's only taken me this long to come up with a review because... PURE is a book that's hard to put into words.

Reader Gut Reaction: I was by turns engaged, provoked, and thoughtful.
Not only because PURE has a kind of post-apocalyptic Mad Max vibe going on, where bands of like-bodied mutants band together to protect turf, but because, as I read on, I discovered the author's immense imagination. The division of the world is CLEARLY not solely the than haves vs. have-nots, in terms of resources, but it's the scarred vs. pure. This both privileges and identifies those person from the Dome. Privileges, because they're... unbelievably beautiful to those who were outside the Dome during the Detonations. Identifies, because those mutated know who to blame... after all, as the children's rhyme says, "burn a Pure, and breathe the ash..."

Those this is not strictly dystopian, by the rules of the genre, it falls under post-apocalyptic disaster novel, which is close to that.

Concerning Character: Pressia is tough, single-minded, and a survivor. Though comparisons have been made to Katniss Everdeen, Pressia's kind of toughness is different - her vulnerabilities show in the little sock she pulls over the doll head embedded around her fist, and in her inability to give the coup de grace to a dying boy -- whose only crime was being too small to cope with the rigors of his new life. In daylight, Pressia remembers no other world than the one she inhabits, but in quiet corners of her mind, in dreams, she recalls that once upon a time, she knew something other, something else. Something... better. Of age now to be part of the street paramilitary - who's in charge of these wild and violent people? She doesn't want to know - Pressia fears she's too small to resist, and if you're not a soldier -- one of those untaught to read and seeded with violence -- then, you're target practice. She knows how to hide. And, she'd been completely prepared to do that - except, she ran across someone stupid - someone standing tall and flawless and Pure - and now, her life is all tangled up with his. 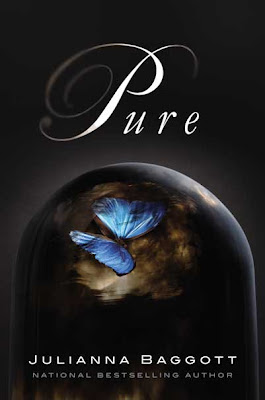 Inside the Dome, not all is perfection, by any means. Partridge just barely remembers his mother, in the time before the Detonations, but it's his brother he misses - the perfectly muscled, intelligent, über-son who should have been exactly what his father wanted, only he died on his first mission outside the Dome. And now, Partridge is all that's left, and the memories of a mother who didn't make it into the safety of the Dome before the world as they knew it perished in flames.

Maybe that doesn't mean she's dead, though. Partridge is willing to gamble his entire existence in the belief that there is something out there, outside the Dome, that is worth having, and worth saving.

There's certainly nothing much for him to live for on the inside...

A daring escape to the Meltlands puts his life at risk -- and the lives of those around him. Was this all fate and destiny? Or... something else?

Recommended for Fans Of...: the post-apocalyptic stuff with mutants, like Daybreak 2250, by Andre Norton, The Folk of the Fringe by Orson Scott Card, The City of Ember, by Jeanne DuPrau, Moira Young's Blood Red Road, and James Dashner's Maze Runner series.

Themes & Things: Themes of identity and discovery are relevant for each character -- without giving away too much, those within the Dome and without are all in a manner of speaking survivors, and all trying to figure out for whom and for what they survived, and how to move on. The grotesqueness of some of those surviving brings the question of whether or not they should have died.

There is also a theme of sacrifice in this novel - and the question of what each character is willing to give up to go forward is threaded through minor moments and major scenes. There is incredible selflessness followed by mind-bending parsimony. This keeps the reader engaged and never quite sure how the twists and turns are going to pan out.

Cover Chatter: Instead of focusing on the theater of disturbingly mutated and melded body parts featured in the novel, the publishers wisely chose to focus on the beauty and perfection of the Dome, and the Pure inside of it... and the metaphor of a butterfly perfectly preserved, ...and perfectly unable to fly free.

Authorial Asides: Julianna Baggott is a novelist, essayist and poet who also writes under pen names Bridget Asher and N.E. Bode. She is an associate professor at Florida State University's Creative Writing Program. She has written SEVENTEEN BOOKS, and yet retains the humility and new-book nerves of any author who hopes their book does well in the big world of readers.

(It did, Julianna. Thanks for writing.)

Check the author's blog if you'd like to interview her; she's making herself available for book chats!

PURE has been film-optioned by Fox 2000, and it really will play well on the big-screen, just for the weird and horrific Meltlands, the Groupies, and the Dome rising pure and unsullied in the distance... this will be like The City of Ember meets Mad Max on steroids.

You can find PURE by Julianna Baggott at an independent bookstore near you!
Posted by tanita✿davis at 1:23 AM
Labels: Dystopian, Fantasy/Sci-Fi, Reviews

I've been very interested in reading this, and now I am more so. Must find more time to read.

I saw a sketchy review at Laini Taylor's and what stuck out to me was the doll-head-hand... it's so weird and disturbing and -- huge. It's a huge world, and I wonder where the series is going...!

I was only vaguely aware of Julianna Baggott. I'd seen some of her children's book covers, but as so often happens with me, that fact both registered and didn't. Then a couple of weeks ago I read her essay, Literary Murder in The Best Creative Nonfiction Vol. 3. Kicker of an ending. I've been to her blog. She has some posts I'm planning to link to as part of my Time Management Tuesday project. So now she's on my radar.

This one's been getting a lot of buzz--I even heard an NPR mention--and a lot of that buzz has been very positive. Your review gives me more food for thought than most others, and so I think I will look for the book. I was a little concerned before about gratuitous mutant grotesquery, but it sounds like it serves the plot/theme rather than being an empty attention-grabbing device.

@ Gail: She is on my radar as well; thank you for the additional info on the creative nonfiction.

@ Sarah: And that's what had me hesitating to read this at first - the other reviews only mentioned the mutants, which... not so much my thing. But it's just a much, much, MUCH bigger and better story than that.

I REALLY enjoyed "Pure" and can't wait to start "Fuse"!!! If you have not already done so, the Pure Trilogy are books that you have to read!!! I decided to do a book report on "Pure", and this was the only thing that I was having trouble figuring out... Does anyone know what the climax of "Pure" would be?