I've gotta be honest with you—lately I've been so busy that fitting in a blog post even twice a week has seemed like an impossibly Everestian endeavor, so today I'm just going to offer a few brief, informal reviews, catching up on a couple of books I read a while ago and haven't yet had the opportunity to mention. These are both books which present complex and even tormented narrators, whose experience makes the reader question what's real and what isn't. As always, if you've read them, we would love to hear what you think in the comments! 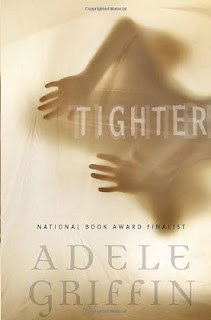 A couple of months ago I was at the library and happened to see Adele Griffin's latest book, Tighter. Having enjoyed the other books of hers I've read—particularly The Other Shepards and Sons of Liberty (reviewed here)--I was looking forward to reading another one, especially since I haven't read one of hers in quite some time. Like those other two books, this one, too, features a narrator who might or might not be reliable. After all, we find out early on that the narrator is...well...being haunted. It's been happening for a while, and when she gets the opportunity to spend summer as an au pair for a lonely 11-year-old girl on a small New England island, she's hoping she'll be able to escape her ghosts.

But to her horror, she finds she's being haunted by new ghosts, and one of them is the au pair who used to work in the very house where she's now living. While it's not quite as character-driven as I remember her other books being, this one's got plenty of suspense, danger, disorienting twists, and and creepy surprises; I'd recommend it for fans of the classic ghost story Turn of the Screw by Henry James.

You can find Tighter by Adele Griffin at an independent bookstore near you! 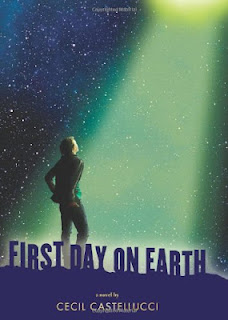 In the same library haul as Tighter, I also came across another one I hadn't heard about, Cecil Castellucci's First Day on Earth. Like Adele Griffin's narrator, Castellucci's teenage protagonist Mal is different, and he knows it. Because Mal has been abducted. By aliens. Beamed up, probed, set back down miles away, the whole bit, with a scar to prove it. Of course, nobody he knows at school would ever understand, and so he sort of floats through life, trying to take care of his alcoholic mother (since his father abandoned them years ago) and not attract too much attention. The only people who really seem to understand are the ones in his support group, a kind of Abductees Anonymous where he can tell his story and not be afraid of ridicule.

Some of the group members are downright crazy, but then Mal meets Hooper. Hooper stays quiet during group, but Mal finds out something even more different about Hooper—he says he IS an alien. And he's going home soon. Though this causes Mal to begin questioning his own sense of reality, he also, for the first time in a long time, finds himself connecting with another person, even if that person might not really be...human. Dark and more than a little painful, this one evocatively depicts the pain of alienation (no pun intended) and the undeniable need for connection that we as humans can't push away no matter how hard we try. Jen Robinson wrote up a more detailed review with a few great quotes—go check it out for more info.

You can find First Day on Earth by Cecil Castellucci at an independent bookstore near you!
Posted by Sarah Stevenson at 8:00 AM
Labels: AF, Guy Appeal, Problem Novels, Reviews, Suspense

I loved FIRST DAY ON EARTH! It read like a realistic contemporary, yet had this alien plot element.

Yes! And yet it also had this ambiguity to it re: the alien plot element--I found myself constantly questioning what was real and what wasn't...