John Hughes fans will appreciate this very madcap and lighthearted tongue-in-cheek tribute to Ferris Bueller's Day Off which combines a family story with fantasy elements and lots of feline hijinks.

If you're in the mood for something fast-paced and frothy, and you love Chicago, John Hughes, Ferris Bueller, and ...cats... pick this one up.

Reader Gut Reaction: This book is an airy confection filled with hijinks, shady characters, star-struck fanboys and a lot of running around. I found some of the characters slightly over-the-top, and the real-life celebrity parallels were amusing, but this novel has a lot of glitter going for it - and a lot of heart.

Concerning Character: Natalie Ng has supersmart parents - a mother with laser vision, a father with an incredible nose for discerning scents, a little sister with chameleon abilities and a supergenius brain that landed her in her senior year -- two years ahead of her Nat - and an elder sister, Viv, who, as a college freshman, is already hired and working for the BERM - the Bureau of Extra-Sensory Regulation and Management - with her three Class A Talents, which include levitation, and being a human lie detector.

You kind of understand why Nat is thoroughly underwhelmed by having a Class D Talent - she can communicate with cats. She's more than a little hung up on it, and fairly self-deprecating. Nobody, she alleges, could possibly think that talking to cats is cool. Her parents overlook her, and she lets them. Her baby sister is Evil, as far as Nat's concerned. Even the cat encourages her to engage a little bit more, and actually communicate to her family what's going on with her - but, no Nat's happier whining and talking herself down. So, when only she hears a cat complaining that it's been kidnapped... it's a hard decision for her to actually DO something. Something other than wonder what she should do, anyway.

Good thing she has a couple of pushy, star-struck friends. 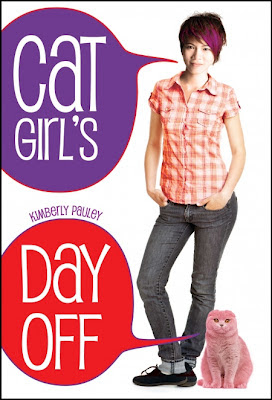 Her friends are the only major negative to this novel for me. Oscar is flamboyant yet punky airhead, a stereotypical drama-diva only concerned with following the utterances of a celebrity blogger. While he's kind, when he thinks about it, mostly he seems to be in the novel for comic relief. As a six foot tall gay half-Asian boy, though, he isn't typecast, at least.

Best girlfriend, Melly, while supportive in other ways, including pushing Nat to finally actually speak to her trig partner and crush, Ian, is so blitzed out on the idea of meeting her favorite actor that she willingly walks away with A Known Evil. I found that really hard to swallow - even in a comic novel. It seems like Natalie - the one who talks to cats - is the only one with half the sense of a gnat, which is really ironic when it comes down to it. Score one for the crazy cat girl, even though she's terrified of anyone finding out her Talent, and poised to go into hiding FOREVER if anyone calls her Cat Girl.

Take one missing celebrity blogger - add a stolen pink-dyed cat, a filming on a high school campus, a real catfight, a cat-shelter break-in, Wrigley Field, and whole lot of snarky backtalk from cats. Mix in a breezy fashion to create an absolutely nutty novel which reminds you to never, never, never take suggestions from your feline pet.

Recommended for Fans Of...: BAD KITTY, by Michelle Jaffe, I'D TELL YOU I LOVE YOU, BUT THEN I'D HAVE TO KILL YOU by Ally Carter, and pretty much of all E. Lockhart's Ruby novels. If you like your comedic novels light, fast-paced, with a lot of snarky patter, this is one you might enjoy.

Cover Chatter...: How much do I like that a.) the main character's Asian face shows up on the cover, purple hair streaks intact (my sister WOULD LOVE THIS. No joke. She covets those streaks.), and b.) both she and the cat have speech bubbles? Also, I love that the cat has those stupid, notched down ears -- I know that's a cat breed, but I swear it looks REALLY GOOFY. Which is what Nat thought of Rufus Brutus the Third... aka Tiddlywinks.


This ARC courtesy of NetGalley; my opinions are my own.

After April 12th, you can find CAT GIRL'S DAY OFF by Kimberly Pauley at an independent bookstore near you!
Posted by tanita✿davis at 7:33 AM
Labels: Fantasy/Sci-Fi, Multicultural Fiction, Reviews

Wow. I totally need to read this. I'm in the mood for something lighter, now that I've plowed through so many political intrigue/girl is dying or grieving a loss/horrible things are happening to hero novels lately.

It IS a great cover, and I like the premise--Amazing Family, Girl with Class D Talent. And I did like Sucks to Be Me--I'll keep an eye out for this one at the library.