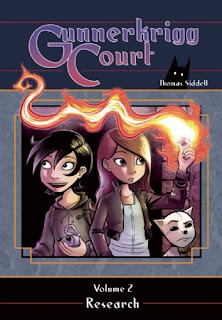 The first volume of this series, Gunnerkrigg Court: Orientation (reviewed here), was last year's Cybils winner for YA graphic novels. So I was pleased to find Vol. 2 in my library and continue the tale of Antimony Carver and her friend Kat at a very mysterious school—one which happens to adjoin a wild forest populated by faeries, spirits, animal-gods, and other non- and quasi-human inhabitants.

Reader Gut Reaction: As before, I was immediately engaged by both the artwork and its visual style as well as the surreal setting and wide range of quirky characters, each with their own story. I love the references to various different mythologies, whose coexistence is never quite explained—at least, not yet. We don't yet know the secrets of this odd place, of this setting which contains magical (or "etheric") elements as well as science. Though fans of school stories like the Harry Potter books would probably enjoy this one, Gunnerkrigg is no Hogwarts. Though it, too, hides secrets everywhere and has a few ghosts hanging about, nothing is quite as clear-cut; there's no easy division between wizards and muggles, no complete separation between life and death and clockwork, between human and faerie.

Concerning Character: Antimony has a preternatural connection with the magical realm—but, by contrast, Kat is somewhat of a mechanical gadget-building and robot-repairing genius, so they make a good team. Their personalities play off one another nicely, with the more solemn and reserved Antimony balanced out by bubbly, energetic Kat. And the range of side characters, as before, is fascinating, though not overwhelming—the serial nature of the story means that we don't get too many new people introduced all at once. Each installment brings a new layer to the overall arc, but each one stands alone nicely. And in this volume, we learn more about Antimony's late parents, and their connection to this place and to Kat's parents. What exactly we learn is a bit enigmatic, but it does become clear that Antimony has a destiny to fulfill—and Gunnerkrigg intends to train her for it.

Recommended for Fans Of...: Fantastical school stories like Harry Potter and Percy Jackson—-but this one's told from a female character's perspective. Fantasy that combines the modern or scientific and the magical, like, oh, anything by Diana Wynne Jones, or Jaclyn Dolamore's Magic Under Glass. Fans of the Sandman comics, which also bring together various mythological elements that seem disparate but somehow come together.

Themes & Things: You'll find a lot of classic adventure-story themes in this one: friendship, loyalty, not judging people by their outward appearance (even if they look kinda scary), learning who you are at the very core, having your mettle tested through unexpected trials. One of my favorite themes from this series, though, is the idea that we can create our own family—our friends and companions, the ones who are loyal to us and care about us, the ones who have our backs when things get hairy or weird. Antimony has lost her family, but she has found a new one in Kat and her parents, in the fox-spirit Reynardine, in the sweet little ghost Mort, in her second shadow. An odd assortment, to be sure, but it's what's inside that counts...

Authorial Asides: Check out our Blog Blast Tour interview with Tom Siddell for a Q&A with the author-illustrator. Volume 3 of Gunnerkrigg Court is also available now (though, sadly, not at my library yet).

You can find Gunnerkrigg Court: Research at an independent bookstore near you!
Posted by Sarah Stevenson at 8:00 AM
Labels: AF, Cybils, Fantasy/Sci-Fi, Graphic Novels, Reviews, Steampunk

I enjoy this series so much - and now as the girls are getting older, they're even more interesting - big enough to cause trouble and get into places where they've been told not to go! Fun stuff.

I'm gonna have to get this!! I love graphic novels! This looks great!

These are so much fun. You can also check them out online: http://www.gunnerkrigg.com/index2.php

I should also have put, in the "Recommended for fans of" section, anything by Kazu Kibuishi, like Flight or Amulet.

Love this series. Kyle was OVERJOYED to get the notice that the third volume had come in at the library. He couldn't get there fast enough and had reread the first two to prepare.