The 2011 Cybils: Pegasus, by Robin McKinley

No, not that one, from which they made the awkward 80's movie with the big fakey flying dog, and all, which was supposed to be like a dreamscape but which I remember more as kind of mawkishly twee nightmare. No, I mean a real never-ending story. That I could walk to. Because her worldbuilding is bar none, and I want to LIVE in Rhiandomeer. Or maybe even set up a tent beneath The Singing Yew. Robin McKinley breathes life and breadth into her stories, and I always hate when they're all over.

I hated it a lot more in THIS case -- (but more on that later) but I loved being in this story, and the gradual expansion of the characters from unknowing and incurious separate beings, to being heart-awakened and arms-wide-open creatures who wanted to be more than the representatives of two countries in treaty, but they wanted to be true friends.

And yet, having said that, it's not one of those stories, wherein a girl and her animal pal are embarking on "a beautiful friendship." There's nothing gag-inducible, twee, or "aw'fuly sweet" here. Promise.

Concerning Character: Sylvii -- whose formal name is Sylviianel, princess of the line of Gohasson, daughter of the sixth in that line, Corone IV, and his queen Eliona, fourth child of them I call my parents -- is just a spare heir -- the fourth child of her father, who will, like the other children of the royal line and of marginal political importance, upon her twelfth birthday, be bound to a Pegasus. Sylvii is a rather young girl, as the story begins -- young in her perceptions, in the way she takes her elders' word for everything -- but as the story moves forward, she grows and changes, as does her young Pegasus friend. Her eyes are opened to the way that the world is -- and the way that it could be. She is a strong female character, and yet can't really be characterized in a heroine fashion. She is frightened and unsure of herself, full of dread and whimsy at times, just like anyone might be who sees the world change. Though she's the fulcrum upon which much of the change in her universe sits, she doesn't feel that way. 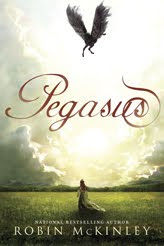 Recommended for Fans Of...: If you like slow, quiet stories which grow on you - like The Two Princesses of Balmarre, by Gail Carson Levine, or The Blue Sword -- unsurprisingly by Robin McKinley as well -- then you'll enjoy this one. It is an indirect meander of a story which suddenly begins to roll forward... and by the last page, it's all but hurtling down a slope.

You might want to hold off of this one if you're not a fan of the cliffhanger-to-sequel. The tale hurtles off not exactly a cliff, but into a wall -- it seems as if the editor simply said "STOP," midway through an argument -- a crucial, terrible argument at court, between powerful people and others -- and the book ended when there were words still echoing in the room and fragmenting to the floor. It's a bit frustrating, really... but it's all to a purpose. We are immediately aware: the battle may have reached a standstill, but the war is just beginning... on myriad levels.

There is much I cannot tell you, because I want to give you no spoilers. It's a slow, steady, book that blooms.

Themes & Things: Throughout eight hundred years of history between the two peoples -- because the Pegasus indeed are a community with laws and language and art and education -- there have been very few who could directly communicate. Though the Magician's Guild has come up with a means for them to do so, through a binding ceremony, few humans learn their whuffling, whinnying verbal language, or the subtle sign-language and no Pegasus Sylvii has ever met can use his horse-ish mouth to speak words like a human.

And then it all changes.

That's really the theme of the whole novel. People hate change. People who like to hold power and lord it over those who they consider beneath their notice or "little" people especially hate change, and are threatened by it. Those who embrace change have a special gift - and a power to do a great deal with their acceptance. Sylvii is overwhelmed at times at changing the course of recorded history -- but now that she is stepping through the doorway of change, will she have the courage to see herself -- and her kingdom -- through to the other side?

Authorial Asides:About that ending: on her blog, Ms. Robin says that Pegasus II is coming in 2012. And may I say? It had better. That is all.

You can find PEGASUS, by Robin McKinley -- and very soon, its sequel! -- at an independent bookstore near you!
Posted by tanita✿davis at 10:03 AM
Labels: Cybils, Fantasy/Sci-Fi

I've always said "life and breath", so I was struck by your use of "life and breadth." Breadth is so much more appropriate for the spaciousness of Pegasus' world....(and of course you wouldn't breath breath into something).

I love McKinley for the pictures she makes in my mind!

(I have been thinking about life and breadth more (than it deserves), and realize that my confusion comes from the fact that I say "as I live and breath", and rarely breath life into anything.....)

I've been a big Robin McKinley fan ever since I read BEAUTY when I was twelve (I've re-read it at least half a dozen times since). I hadn't gotten to PEGASUS yet, but this review makes me want to run out in my pajamas and buy it right now!

Oh, I can't wait to read this one! One of my favorite books EVER is Sunshine (which is extra amazing considering my skepticism of vampire novels). I might wait a while until the next one's available, though...

SUNSHINE is also one of my favorite books! It's hard to believe that the same author who came up with BEAUTY also wrote SUNSHINE. But that's just a testament to McKinley's skill, I think. She's a master.

Charlotte: This is why I love you. You have no idea how many times I changed that phrase 'til I came up with "life and breadth." And it is life and BREATH, because we live and breathe, but I just really think life & breadth explains The McKinley Thing.

Maegan: for me it was The Blue Sword which I STILL go back and read periodically. I want to live in Robin McKinley's head. Or something like that.

A.F.: WAIT. It comes out early enough next year that it'll totally be worth racing from one to the next... because OH! That ending...

Wait, did you just diss Falcor?

Well, I guess I'll be waiting a little bit longer before I read PEGASUS. Good thing I have so many other books to read between now and then . . .

Oh, poor Robin. I have been in that Dark Night of the Soul just-can't-write-this-anymore place, so I think starting a new novel is ... well, what we all want to do. Thank goodness it actually worked for her!!