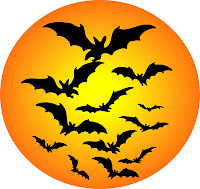 Happy Halloween, Celtic New Year, Day of the Dead, and so forth!

No matter what your plans are, we hope you enjoy yourself.

This book was a Cybils nominee for Middle Grade Fiction last year, in 2010. 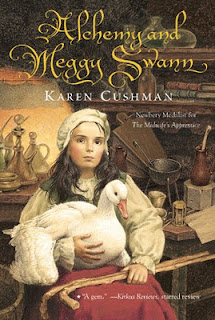 Reader Gut Reaction: I am not necessarily a huge fan of historical fiction--I only read it occasionally--but I've enjoyed every book I've read by Karen Cushman. Alchemy and Meggy Swann is no exception; it joins the other wonderful books she's written about life in the Middle Ages and the Renaissance. This one takes place in Renaissance London, the Elizabethan era, just before the time of Shakespeare. The setting is brought to life in vivid detail--not sparing the unpleasant aspects such as, er, defenestration, though not making so much of them that it distracts from the story itself. You can see, smell, and hear the bustle of the streets and gain a sense of what daily life was really like in an era that has inspired many somewhat romanticized portrayals and reenactments. But don't fear--this story has its share of intrigue and dastardly doings, too.

Concerning Character: As one might glean from the title, this is the story of Meggy Swann, a girl in her early teens who comes to London to live with her father. Her gran, who mostly raised her, has died, and her mother has no use in her country tavern for a lame girl who must walk with the aid of sticks, and even then only painfully. So Meggy is sent to the house of Master Ambrose, an alchemist who cares only for his work. Left mostly to fend for herself when not helping in the laboratorium, Meggy learns that, far from being helpless and alone in London, she is quite capable and plenty smart enough to survive, and even thrive. I love stories about plucky heroines; Meggy certainly is one, and comes into her own in characteristically sharp-tongued and determined fashion over the course of the novel.

Themes & Things: One of the themes I like most in this book is the idea that when we get old enough to do so we make our own families--in contrast to the ones that we're born into and may or may not even get along with, even if we care about them, we also make our own lives and surround ourselves with people we love whom we've chosen to be with. Meggy ultimately finds friends, even family, in her father's erstwhile apprentice Roger, Roger's troupe of fellow players, and the printer Master Allyn. Opening one's heart is also a major theme here—along with the rewards of doing so, as well as the tragedy of not being able to do so. And, of course, Meggy's story also embodies the idea that a physical disability does not define a person or prevent them from accomplishing great things.

You can find Alchemy and Meggy Swann at an independent bookstore near you!
Posted by Sarah Stevenson at 8:00 AM
Labels: AF, Historical Fiction, Middle Grade, Reviews

How much do I adore whomever it is who does the covers for Karen Cushman's historicals? I LOVE this - it makes me want to read it doubly.

YES! I was going to mention that. I do love this cover. It's covers like these that made me want to be a book cover illustrator for so long!

Great review! The cover was what attracted me to the book in the first place. I think I would have enjoyed this book a lot better if I was much younger. I still rated it 4 stars but it didn't make that much of an impact on me.

Under The Mountain Reviews