Our Cybils panel doesn't discuss specific books before a certain period, but we have some general exchanges about themes and trends. This novel is another of those "threatened womanhood" dystopias we've discussed, wherein a young woman's fertility is a treasured, protected, envied, and stolen commodity.

Dystopias, according to the Guardian today, reflect the chaos and stress of a young reader's life. A new wave of dystopian fiction at this particular time shouldn't come as a surprise to anyone. It's the zeitgeist. Adults write books for teenagers. So anxious adults – worried about the planet, the degradation of civil society and the bitter inheritance we're leaving for the young – write dystopian books." So, perhaps dystopias related to the commodification of female fertility reflects adult writers who are worried about the next generation? Who knows? It's a creepy, creepy topic, one which sets the tone for some very dark and disturbing novels. 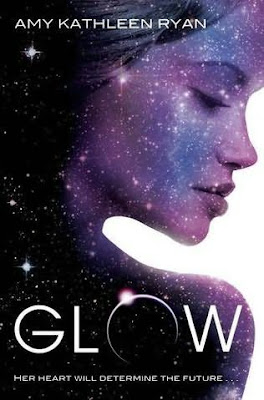 Reader Gut Reaction: Utterly. Terrifying. Those are my gut reactions. I'm a private person. I am private about my beliefs, and private about my body, and those privacies would be challenged aboard a space going vessel -- a vessel with fertility issues and plenty of young women coming of age in the midst of a generation of older couples and single men. Even on a ship as large as the Empyréan, aboard which Waverly and Kieran fly, there are problems. A rendezvous with New Horizon should have been simple - an exchange of supplies, or whatever it was they needed. Instead, there's no exchange, but theft. And much, much bigger problems left behind. Suddenly day-to-day survival is all a matter of life and death.

Concerning Character: Waverly and Kieran both are earnest and trying very hard to be the best they can be - but both have working against them lack of experience and age. Kieran is immature and self conscious -- but he's the captain's favorite and he knows it. He expects to take over from him someday. He cuts corners now and then, but knows he'll be forgiven. His family is religious and he expects that his wife will come to that way of thinking. The only problem is Waverly, the girl he expects to marry, is fifteen to his sixteen, and not ready to be marry, no matter the fertility issues, or the concerns for the landing generation of spacers. It's a lot of pressure, and Waverly is a girl with her own opinions. As it turns out in time of crisis, Kieran is more mature than expected, and Waverly has a core of pure steel. Both of them make mistakes - Kieran still doesn't really hear people when they speak, and Waverly, frightened and disgusted by the manipulation of belief, makes a tactical error that could divide the loyalties of everyone, just when they need to stick together. Both characters make tough choices, and come through when it counts.

Recommended for Fans Of...: fiction with strong female characters and major choices made in times of stress. If you enjoyed ACROSS THE UNIVERSE by Beth Revis, this is the more active, running around version. 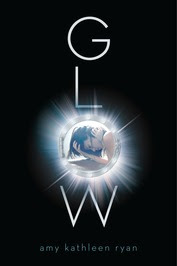 Themes & Things: Religious faith can seem a big, threatening thing to those people who don't grow up with it. Charismatic or evangelical people who seem to want to proselytize can be kind of terrifying. Faith in this novel is really manipulated by an evil, evil woman, who does all manner of things in the name of God -- or, her lowercase g, false version of said. There are a lot of YA novels which sort of beat the drum of "all religious people are nutters!" I'll be interested to follow this series to see if there can be some sort of middle ground on this - not all nutters, but not all holy and righteous and correct, either. Maybe a "some are, some aren't" balance, that more reflects real life?

Despite the words "heart-stopping adventure!" trumpeted on the cover, this novel is all about good and evil - and what constitutes good, in a tricky, gray area. (Evil here is pretty self-explanatory.) Is there ever a "for your own good," that is really all about good, and just "because I said so?" Is there ever any justification for making your ideas the ideas everyone else should hold?

Authorial Asides: This is Wyoming-ite Amy Kathleeen Ryan's fourth book - but her first foray into SFF. She has come out swinging.

Cover Chatter: The last Sparkly Star Peeps book I read was ACROSS THE UNIVERSE, so I laughed - then groaned - when I saw the hardback's trend-similar cover. Though this book shares some similarities - hey, it's space! - GLOW couldn't be more different...both covers feature couples on the covers in a field of stars, but the model depicting Kieran is on the back, while a bluish Waverly is on the front. The audio book version is much cleaner, with only the letter O depicting a girl who looks slightly despairing or depressed.

Seeing as this book covers a bunch of huge and heavy topics, the cover seems a little downplayed and space-generic, but there's probably no "perfect" cover for "geez, you're going to commodify my fertility, huh?" So, let's just say, "Those stars are sure pretty," and leave it at that.

You can find GLOW and other books by Amy Kathleen Ryan, at an independent bookstore near you!
Posted by tanita✿davis at 1:53 AM
Labels: Cybils, Dystopian, Fantasy/Sci-Fi, Reviews

Well, this sounds good--but yes, the cover looks EXACTLY like Across the Universe. Not just because of the field of stars thing, but it's the same color, too.

This is on my list--I'm looking forward to it more now!

There's a resemblance, Charlotte, but I like this one a lot better... to be honest, it took me a moment of blinking to figure out what I was looking on AtU's cover!!! Angel fish. Yeah...

I have a review!

This is a very fast paced book. A story set in the future, at a time when the earth is dying, two space ships have been launched to the same destination but initially within different time frames. Both ships have fertility problems on board, one overcomes them, the other does not. One ship is religious, the other is not. Conflict arises and when the two ships meet up chaos arises.

I think this book would be better suited to older teenagers as there are some adult themes in it and some rather dark things do happen, which I found a little disturbing.

What I also did not like was how difficult situations often bought out the worst in the characters in the book, rather than the best in them. At first I thought Seth and Kieran would turn out to be good characters, but in the end was less sure of them both.

The strongest and best character in the book by far was the girl Waverly, who I found myself rooting for.

Hey, Connie, thanks for sharing your thoughts. I do agree that I'd direct this toward older teens - I was caught off-guard by a couple of situations, and disturbed, too. Waverly is my favorite character, by far. I'll be interested to see how the rest of the story takes shape.

Just finished this one. Waverly--definitely my favorite character by far. I really enjoyed the book for the most part. The pacing was tight, and teen sci-fi adventure in space is great. The premise was interesting, as was the setting, and I found both of those a bit more believable and less fantastical than in Across the Universe.

By the same token, I was a little unnerved by the faith/religion theme, because I'm still not sure where it's going. Right now EVERYONE on both sides seems a bit despicable in terms of using ideology for their own gain. I'm hoping it gets resolved without one-sidedly decrying either faith or lack thereof...

Since SPARK is on my list for Cybs this year - and there's a whole lot of holds on it - I am pretty sure I'll own it, and can lend it to you.

I truly hope there's some resolution without good mixing more with evil, and vice versa. The whole fertility and religion angle is JUST. SO. CREEPY.