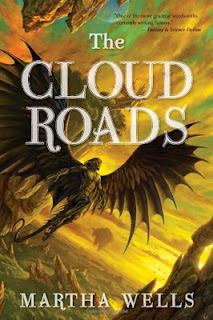 Reader Gut Reaction: I wasn't familiar with SFF author Martha Wells, but I was intrigued by the refreshing premise of her YA fantasy novel The Cloud Roads. You'll find no vampires or werewolves here, but you will find shapeshifters who can morph into flying beings both beautiful and terrible. In a starred review of an earlier novel by Wells, Kirkus Reviews said, "In a field teeming with clones, retreads, and solipsistic doorstoppers, Wells dares--and gloriously succeeds--to be different." And different this one is—but the story rests on a solid foundation of some of my favorite fantasy tropes. Moon, the protagonist, is an orphan with an enigmatic past, who finds out he is not alone in the world but rather a member of a race of shapeshifters, the Raksura. Neither he nor the Raksura know it yet, but they need him in order to save their entire race from another set of shape-shifters: the violent, destructive, and unscrupulous Fell.

Concerning Character: Moon, the narrator of the novel, strikes a perfect balance between the novelty of being a shapeshifter and the familiarity of emotions and reactions that characterize just about any young man coming of age. He's relatable yet also mysterious and sort of awe-inspiring. Over the course of the novel, his character development is satisfying--at the beginning, we see Moon as a decent guy, but sort of hapless, and cursed with misfortune, mainly stemming from the fact that he is so different and forced to hide his difference. If you happen to be a shapeshifter, but the only other shapeshifters the groundling races know about are the Fell...it's just not a good idea to let them find out what you are.

At the beginning of the novel, this is what happens to Moon--yet again. But this time, his exile leads him to more of his kind. The only problem is...he doesn't quite trust them, doesn't quite trust their motives toward him. At the same time, it's his status as an outsider that puts him in a unique position to help the seemingly doomed colony of Raksura.

Recommended for Fans Of...: Tightly written traditional fantasy and sci-fi with great characters and lots of attention paid to the different cultures in the world at hand, like Kage Baker's fantasy books or Tamora Pierce's Tortall novels.

Themes & Things: One of the ongoing arcs in this story is Moon learning what it means to not be stubbornly solitary and closed off—learning that there are times when it's okay, even right, to trust and rely on others. And, of course, a big part of the book is Moon's journey to finding out who he really is, and figuring out what he should do with his life aside from all the people around him telling him what they think he ought to be doing.

This is an action-packed and exciting adventure with a high ratio of Neat Stuff Per Chapter without trying too hard or being overly dense with new information. And, can I just say how much I appreciated it that the author dealt very early on with the question of just what happens to your clothes when you shape-shift. (Hint: they don't rip into tatters like the Incredible Hulk.) A highly recommended read for fantasy fans.

You can find The Cloud Roads at an independent bookstore near you!
Posted by Sarah Stevenson at 8:00 AM
Labels: Adventure, AF, Fantasy/Sci-Fi, Guy Appeal, Reviews

Try her other books! Martha is one of the few authors I buy in hardback.

Ooh, Edith! High praise, indeed! Thank you for the recommendation.

Intriguing! From the sound of this, I might have to read all her books and some of them would be perfect for my son! Thanks for the recs.

That's great! Glad to be of help. I'm looking forward to reading more of her work, too.