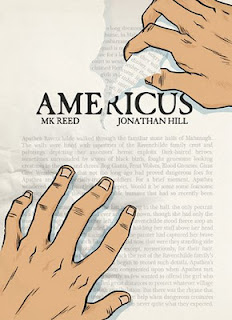 This book is a 2011 Cybils nominee for graphic novels.

Reader Gut Reaction: This is a graphic novel about a book challenge, and the valiant readers who fight that challenge. So I was already predisposed to like it. Main character Neil Barton lives in a small town in Middle America, and one of the few things that alleviates his boredom is reading his favorite fantasy book series, The Adventures of Apathea Ravenchilde, a series that inspires rabid fandom. Even the public librarian, Charlotte, is a rabid fan, and therefore one of Neil's few friends. Sadly, his best friend Danny gets sent away to military school by his conservative Christian mom, who thinks that a series of books about a witch is "unholy filth" that shouldn't be in the library to corrupt impressionable youth. Danny's mom sets out to get the books removed from the library--but Neil and Charlotte rise to the challenge.

I think my only reservation about this book is that it did strike me as having an agenda and being a little message-y--not that I didn't totally sympathize with the agenda OR the message, but I don't know whether that's something that will jump out at YA readers. It might not. I just felt that the authors were very much trying to make a point with the story, though it sure is a point that needs making--and I like the idea of using fiction to make that point, too. 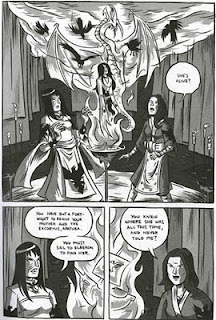 With respect to the artwork, the spare, black-and-white line art really suited the story, and worked well for conveying the humor of this piece. It reminded me quite a bit of the artwork in Raina Telgemeier's Smile and Baby-Sitters Club graphic novels, or Chris Schweizer's Crogan Adventures. The use of tone only in the scenes depicting Apathea's adventures gave them a nice contrasting feel, and provided the interesting implication that the fantasy world was more vivid in some ways than real life. And it's got a pretty awesome cover--very striking, with the hands tearing pages.

Concerning Character: As a freshman in high school, Neil is faced with the same old platitudes about high school being the best years of your life, blah blah blah, and is understandably underwhelmed by them, and by the reality of high school life. The authors portrayed the atmosphere of a small-town high school in believable and hilarious fashion, and did a great job of fleshing out Neil against that backdrop. Neil is really kind of a regular kid--a bit bookish, but he's got a few good friends, and new friends flock to his side in defense of the Apathea Ravenchilde books. I liked that Neil is the kind of guy who gets along better with kids who are a little older than he is--he starts to learn about cool bands from his older cousin's boyfriend Devin, who sees it as his duty to enlighten Neil about music. (This seemed like an amazing excuse to come up with hilarious band names.) 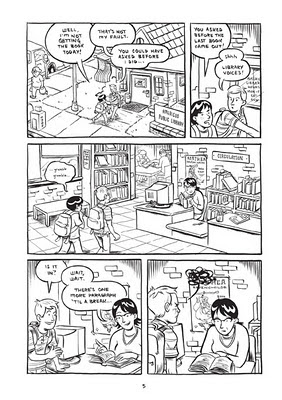 Recommended for Fans Of...: Chris Schweizer's Crogan Adventures (first two reviewed here) will probably like this one—it's got a similar sense of zany humor and a similar visual storytelling style. Fans of graphic novels about real life will also like it--one with comparable themes is Kevin C. Pyle's Katman (reviewed here).

Themes & Things: This book tackles a LOT of topical issues as far as book challenges and conservative politics are concerned, but don't think that means it isn't a good, engaging story. It approaches the issues in a somewhat over-the-top, satirical way, which, for me, helped lighten what could have been an overly serious tone. I also liked how the themes and plot action were echoed by what was going on in the Apathea Ravenchilde books, but without being painfully obvious about it.

I did have a moment of worry that the depiction of the conservative Christian book challengers might be combining a whole bunch of stereotypes into one person (not that I'm defending anyone here) and that that might hurt the very important messages that this book in fact contains, but ultimately I decided it was part of the satire. After all, the fantasy series that is being challenged is equally over-the-top in its own way—I mean, really: Apathea Ravenchilde? Bwahahaha! I love it. Possibly my favorite theme of all, though, is how the sharing of something like a great book or good music can bring all sorts of people together in lively dialogue—this story isn't saying that books are Neil's friends; rather, it's showing how books (and music, too) can help you MAKE friends.

Review Copy Source: requested from First Second (publisher). Interior images also courtesy of the publisher. (You can read an excerpt and check out media info here.)

You can find Americus at an independent bookstore near you!
Posted by Sarah Stevenson at 11:09 AM
Labels: AF, Graphic Novels, Guy Appeal, Humor, Realistic Fiction, Reviews

The message was a little too much for me as well - I felt like the book was on the edge of really being great but fell back on cliche (esp about the parents urging book banning) one too many times. And a child who is gay (or was he - the author got way too ambiguous about that) and then military school? I think a little more restraint would have made this a truly amazing read. It's still good but not as good as it could have been. (I think, anyway,)

I thought the weirdest part was Apathea - apathetic? Apnea? It brought all sorts of things to mind.

I, too, am leery of books which set out to demonize people who do book challenges. I will always hate them, but I stand clearly on the line of understanding them, regardless of how goofy others think that makes me. But, I do understand; so much of the fear from these people is motivated by truly caring about their kids... and everyone else's kids. And American kids. And ... yeah. They're a little out of control. (Okay, a lot. WAY A LOT.) But, they're not evil, and I think it's important to keep remembering that. Because, eventually, we'll all come up against their reality...

I agree about the friend who was/wasn't gay being a bit too ambiguous to be particularly meaningful. I wanted something more out of that, either way.

Here's some Apathea for you (weirdly, I just ran across it a day or two ago while looking for something unrelated): http://en.wikipedia.org/wiki/Apatheia