I had to start this novel twice - about eight months ago, I started Insatiable, thought this one was the same one, and went, "Meh." I blame the covers for confusing me. You know how sometimes you're in a weird place mentally? Totally my fault, not the book. Anyway, the second time, I picked up the book, I thought, "Oh, wait. Did I read about this weird family reunion with the guy from prison and the "did-you-see-a-light?" conversation, and kept going - and then, next thing I knew, the book was over.

Reader Gut Reaction: In a genre saturated to swampiness with shapeshifters, zombies, vampires and angels, this book stands out like a solid place to stand. If you like your fiction with a touch of dark gothic drama, and your romance with a lot of bewilderment and confusion, you'll enjoy this. 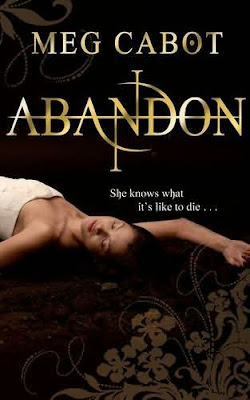 Concerning Character: Pierce's family is really larger than life. There's her father, who sells weapons to the military - and whose company is responsible for oil spills, the death of sea birds, and a lot of other crap. There's her Uncle Chris, who served sixteen years for murder. There's her grandmother, who runs a shop called Knuts for Knitting - and yes, it's as unbearable as it sounds. There's Pierce's mother, who is all about saving the birds - which is why she and Pierce's dad are divorced.

And then there's Pierce: the girl who died and came back to life. The girl who allegedly killed a teacher at her last school. The D-wing girl, whom everyone in her new school thinks is both scholastically challenged and flat-out certifiable.

Her family's a prickly, quirky bunch. Her mother's kind of a hippie at heart, her father is definitely the epitome of Montgomery Burns, from "The Simpsons," but Pierce cares about them fiercely. She cares about her friends. She cares about the sea birds, about drowning animals, about everything alive.

She's been like that since before she died... but it just got a lot more serious.

Recommended for Fans Of...:Keturah and Lord Death, by Martine Leavitt, Robin McKinley's Rose Daughter, The Phantom of the Opera, The Hunchback of Notre Dame, etc. etc.

Themes & Things: Meg Cabot has taken an old, old story cycle and revived it. It's the dark prince longing for the princess of light, in leather-clad bad boy gazing with longing at the fresh-faced girl in the library. Light and dark, stippled into a pleasing pattern; Hades and Persephone all over again. It is an old, well-loved, and in this version, darkly romantic tale. 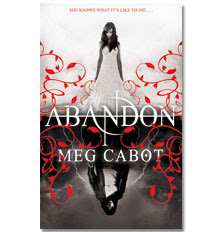 Cover Chatter: Oh, dead girls. Again. Publishing kids. Can we talk about this? I mean, I'm not trying to read something like "violence against women" into this when the plethora of dead girls obviously means nothing, but can we just stop killing waif-y looking teen girls? Please? I mean, I know Pierce dies in this novel, and all. But...

Okay. Let's just talk about the good things. The paperback cover, ferinstance. It's got all the correct elements: a defenseless looking teen, check. A fairy fluffy dress, check. Also: a girl in a leather jacket. Also: a two-worlds theme going on, above/below, light/dark. Now, that works. Actually has something to do with the story, and all parties pictured are alive. Points for a full torso and head, as well!

But, okay, if you like the hardback cover, the ... arabesque-y floral motif and the font and junk are elegant, too. All right? Fine.

You can find ABANDON - in paperback or hardback, if you insist - at an independent bookstore near you!
Posted by tanita✿davis at 5:27 AM
Labels: Cybils, Fantasy/Sci-Fi, Mythology, Reviews

I just finished reading this one, too! I haven't read many of Meg Cabot's books, but her writing is always really solid. And I love the idea of a modern retelling of the Persephone story. There were a few story strands left hanging in this one, which bothered me--what about that creepy Seth Rector kid? It was a fun book, though.

Well, I have the distinct feeling that the story isn't over.