A lot of people say that they are over "dystopia." They might be - but they probably haven't read that much of it to be sure. People often mix up dystopia with post-apocalyptic novels (if you do, I have a flowchart for you), not realizing that a deeply flawed system of government, intended to create a perfect society - that is, a utopia is one of the crucial parts of dystopian literature. I mention this, because government is crucial to this post-apocalyptic novel... government, a misuse of power, and a twisted, twisted little world, in the wake of a nasty environmental disaster, the impact of which is horrifically bad, and getting worse...

This novel reminded me of a whole spate of post-apocalyptic novels, where We live on this side of the wall, safe from Them, including the THE SUMMER PRINCE, by Alayna Dawn Johnson, THE CHAOS, by Nalo Hopkinson; Susan Ee's ANGELFALL, PARTIALS, by Dan Wells, KILLER OF ENEMIES, by Joseph Bruchac, PURE, by Julianna Baggott, BLOOD RED ROAD by Moira Young, and many others.

Concerning Character: As any teen would do anywhere, sixteen-year-old Lane McEvoy pushes the rules. Not as much as some, maybe, but she knows she and her friends aren't supposed to be outside, so close to the Wall, which divides the world that is safe from the world of the Feral Zone, which is anything East of the Mississippi River, where everyone is either infected with the Ferae Naturae virus, or dead. Lane knows the party she and other members of her gang are at for a rare, in-person meeting is completely unsanctioned - germs from laughter, from kissing, from dancing are just flying through the air - but she's there anyway, frequently applying hand sanitizer. Like other teens of the "exodus" generation, Lane has a sentimental name - Delaney Park, which was the place in the long-lost state of Indiana where her parents met, and she's the only child of a super over-protective parent. Unlike a lot of her friends, however, Lane's got an ex-Marine for a housekeeper, and her Dad's job, which requires him to be gone a lot, makes him paranoid about her. Lane's father has been making her take these stupid survivalist classes for years, like he's some kind of bizarre apocalypse hippie. (Which is crazy! He's a lactose intolerant art dealer and wears bifocals, for goodness sakes.) It's only because he remembers so vividly when the plague hit, eighteen years ago. Sure, lots of adults became fearful, but it's not like all of them made their kids into some weird hippies. Lane can live off the land, build a fire, incapacitate an attacker with her bare hands, and find her way anywhere with a compass, or by the stars. In the city, on the safe side of the Titan, the 700-foot-tall wall that extends from Canada to the Gulf of Mexico, who even NEEDS that?

When she's singled out by the authorities and dragged off to a handcuffed walk of shame by the Biohazard Defense guys, Lane's horrified - but she knows she hasn't really done anything that wrong. After all, she just went to a party. It's not like she's been anywhere that she could be infected ... nobody with any sense would do that. She's heard all the crazy stories, after all, aside from her father's fairytales - about people mutating into some kind of Ferals, about the checkpoints, where people tried to get into the safe area, through the wall. About how everything East of the Mississippi is just this empty, alien wasteland... the penalty for going to see is death. Her father's stories have made Lane curious enough to send over a recording device on a remote controlled helicopter, but she's not crazy, no matter what her best friend, Anna, says. Sneaking across the Wall is a felony, punishable by death. And, they have no hand sanitizer there so seriously: Lane's not interested. 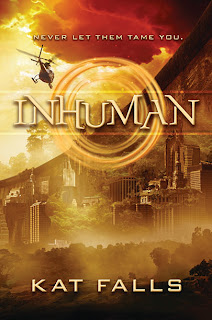 As it turns out, "crazy" is relative, and the truth is a lot more complex than Lane ever dreamed. The more Lane finds out, the more she realizes that everything - the things she thought her life was about, the facts of the history of her society - it all spins on secrets and more lies. The incursions of the Feral Zone into her world are closer than she thinks, and when she's forced to go - completely unprepared - into a world of dangers she never knew existed, there's no way she can be ready -- everything she knows about the Feral Zone is all rumor and her Dad's made-up fairytales.

Lane's out of choices - and soon, someone she loves will be out of time...

WARNING: Once you've read past the first three chapters of this novel, you will be hit with a major urge for hand sanitizer. At times, the delicious shiver of "Eew" will morph into the shudder of "Ugh," but you will keep reading, because you cannot stop. Be aware that there are two boys in this novel: they are both ridiculously good looking. Do not let this make you fling the book in irritation. Do not read while handling heavy machinery. The word "manimal" should not make you think of the word "manwich," and if it does, wash out your brain with soap this instant. There are no such things as chupacabras. In the apocalypse, spiders will be all that's left. Void where prohibited. Your mileage may vary.


I received my ARC copy courtesy of Scholastic and the author. You can find INHUMAN by Kat Falls online, or at an independent bookstore near you!