Turning Pages: THE 14 FIBS OF GREGORY K, by Greg Pincus

This is sort of a disclosure: while I've not met The Poet, Pincus in person, I frequently lurk at his blog. While this review is as objectively critical as I can make it, I consider Greg a friend of sorts, so take that as...whatever.

I have to admit that math is not my bailiwick. Perhaps the fact that I casually throw around words like "bailiwick" might convince you of this; I'm a word nerd, not a numbers whiz. But... I like haiku and senryu, with its three-five-three or five-seven-five patterns. I like reproduction in poetry and in words, and I like pi (well, yes: π and p-i-e). I have, since I was a kid. For some reason, knowing the answer to circles - and knowing the answer was always going to be the same, right answer.... was magic.

I wasn't deeply involved in the Poetry Friday world years ago when the whole Fibs thing - short poems based on the Fibonacci sequence - began, but I tried writing some - and mine, to be honest, sucked. I read about Fibonacci sequences, and talked about them to Tech Boy, who showed me his nautilus shell, and got all excited (he is a numbers whiz) and said a lot of things I didn't understand. Still, the magic persisted. I was glad to be offered this book for review. It reminded me, in many ways, of Brendan Buckley's Universe and Everything in It, by Sundee Frazier, and Wendy Lichtman's Do the Math: Secrets, Lies & Algebra. I liked the fibs which kicked off each chapter, and I love, love, love the cover, which is crammed with mathematical equations, doodles, and that all important slice of pie.

Concerning Character: Gregory K. has a lot going for him: his first and best friend, the shin-kicking Kelly - whose aim for Gregory's shin usually keeps him out of (most) trouble, his in at The Slice, the coffee shop Kelly's mom owns, where he gets lots of awesome slices of free pie, and his awesome basement room, where his poster of Einstein hides an old furnace compartment that houses his stash of poetry notebooks. If it weren't for math, Gregory would have a pretty good life. Of course, he's ultimately a sympathetic character because of the number of things piled against him. One: Math. It's inanimate and doesn't care if Gregory gets it or not. Love it or hate it, it just... exists. Ugh. Two: Owen. I spent a lot of time in the book wanting to kick Gregory's big brother Owen. And possibly not in the shin. He's a typical annoying brother who needles and pushes and teases and mocks, and the worse Gregory feels about things, the worse the self-named "O" gets. It's not easy not being seen as "the smart one" and Owen is pretty full of his smarts - but he can't dress his way out of a paper bag. (This, though true, isn't the sort of thing that really is much comfort, a sixth grader about to flunk out of math, like, completely repeat-it-next-year flunk-out.) 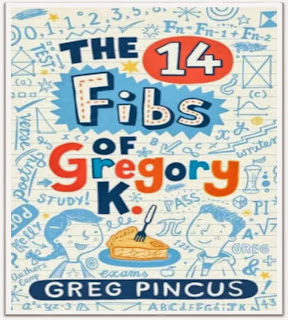 Three: Gregory's parents. They aren't exactly against him, as they don't mean to stress him out with the math games at the table, and the equations written on the blackboard walls of his bedroom, and the silent assumption that he's telling the truth about his love for math. His father never meant the notebook "for all your math ideas!" to remain intimidating and blank. Still, no matter what they intended... no one in Gregory's family has actually ever asked him what his own hopes and dreams and ideas are. And, to evenly spread around the blame, Gregory has never told them. He thinks about what he wants, about those hopes and dreams, and he knows this for sure: they have nothing to do with math. Gregory K. is a poet -- and he doesn't think he can get out the words to let his father know. He's not going to grow up to be like Owen and Kay. He's not even going to be like his accountant mother. He's going to...

Gregory's in trouble. Worse than that, he's taken a short-cut on the truth with his very best and most precious first friend and it's coming back to kick him in the bum. Gregory needs to come to grips with telling the truth to his Mom and Dad about his math struggles, and his real dreams... but first, he's got to tell it to himself.

WARNING: This book is filled with discussions of higher math, references to polynomials, and the word "mathemagical." This may give you math flashbacks. There is both π and pie in this book. The best pie in the world is fresh blueberry, unless it is lemon cheesecake, key lime, apple with cheddar or French chocolate silk. Or peach. The theme of "finding your way" works for both life and numbers. Do not read while operating heavy machinery. Long division is only meditative if you can solve for zero. You may go away from this book a little sad, but just like numbers are eternal, so is friendship, if you let it be.

You can find THE 14 FIBS OF GREGORY K by Greg Pincus at an independent bookstore near you!
Posted by tanita✿davis at 3:02 PM
Labels: Middle Grade, Poetry Friday, Reviews, TSD Review

God, I CAN'T WAIT to read this one. And I couldn't be happier for the real-life Gregory K.