Monday Reading Roundup: BROKEN and THE SHADE OF THE MOON 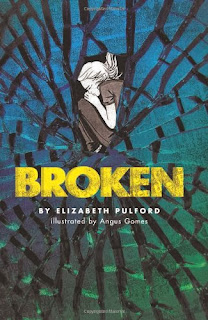 Broken, written by Elizabeth Pulford with illustrations by Angus Gomes, was one of the review copies I was recently offered. It's a book by a New Zealand author, and I'm always interested in  books from other English-language YA markets. In fact, one of my favorite fantasy authors, Karen Healey, is a Kiwi, too. I hadn't ever read anything by Elizabeth Pulford, but I found the premise of this one intriguing. Without giving away too many spoilers, the core idea is that narrator Zara is in a coma, floundering lost in her own mind and trying to fight her way back through a nightmarish world of her own making. Parts of the book take place in a sort of hybrid comic format, which was intriguing and atmospheric--in fact, the whole book is kind of atmospheric, rather than focusing on action, an interesting choice in today's action-and-suspense-saturated YA world. Despite that, there is plenty to keep readers engaged, not the least of which is the gradual revelation of painful truths about Zara, about her childhood, and about her brother, Jem. But she'll have to face those truths if she wants to fight her way back to life. It's a solid read, and a quick one--a good one to hand to reluctant readers, I think, but also a good one for readers who have a taste for the slightly surreal.

You can find Broken by Elizabeth Pulford online, or at an independent bookstore near you! 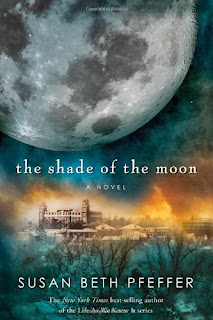 The Shade of the Moon is the fourth and final book in the Life As We Knew It series by Susan Beth Pfeffer. While I really enjoyed the first book, and thought the second was a pretty strong follow-up, I have to admit being less engaged by the third and fourth books. I thought one of the strengths of the early books in the series was their post-apocalyptic survival emphasis--how a disaster tests you and the ones you love, your mettle and grit in both a physical and mental/emotional sense. It's a combination that makes it very hard to stop reading. (Just one more chapter...just one more chapter...)

By the time we arrive at this fourth book, four years have gone by since the meteor crashed into the moon and threw it off its orbit, throwing the world into chaos. And now that Miranda, Alex, et al. have settled into life near an enclave--a larger settlement that has pulled together in some semblance of social structure--things have a sort of routine. Unfortunately, people being people, it's become more of an Orwellian plebes-and-proles situation, and if you don't have a pass to actually live inside the enclave, you're relegated to being a Grub, living outside the walls in poverty and working for the Clavers in whatever capacity they decide you're good for. Clearly a nod to dystopian fiction, I wasn't entirely sure how believable the situation was, and it seemed so different in tone and content than the earlier books that I was a little disconcerted. Still, it was a gripping read, and I rooted for the characters to succeed in a world in which morality and human decency have gone off the rails along with everything else.

You can find The Shade of the Moon by Susan Beth Pfeffer online, or at an independent bookstore near you, or--like I did--at your local library.
Posted by Sarah Stevenson at 7:22 PM
Labels: AF, Dystopian, Fantasy/Sci-Fi, Post-Apocalypse Fiction, Realistic Fiction, Reviews, Suspense

Expected to see the last Pfeffer for the Cybils, but nothing yet!

What a challenge to keep that series going - but I like that her follow-through remains realistic.