This week is quickly slipping out of my control in terms of TOO MUCH STUFF, and yet somehow through all the stuff I keep reading like a mofo, and so I do have reviews to catch up on--or, at the very least, Good Books to Mention. Noteworthy Reads of Recent Days. Whatever you call it, I've got plenty. Here are a few fun sci-fi reads that I enjoyed, dating back (she sheepishly admits) to the summer. 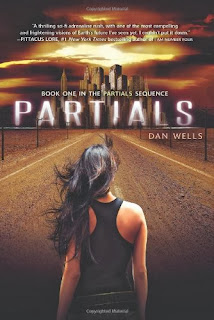 The first two books in Dan Wells's Partials series--Partials and Fragments--I fortuitously found in my library's ebook collection. The series takes place in a sort of post-apocalyptic world, in which a race of genetically engineered and in certain ways physically superior humans called Partials have decimated the plain old human race after a devastating war. Of course, there's always more to the story than Partials Iz Evile, and that's true in this case as well. They may, at first, remind you of Terminators, and certain aspects of this series are indeed Terminator-esque (including the strong female lead, Kira) but both humans and Partials will surprise you at every turn, and the story is plenty action-packed and suspenseful. Really quick, gripping, plot-focused reads. I found myself enjoying these to such an extent that I was telling my husband about how interesting the premise was, when normally I try not to bore him with details of every single book I'm reading. So there you go.

You can find Partials and Fragments by Dan Wells online, or at an independent bookstore near you! 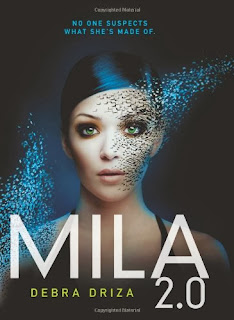 I also found Mila 2.0 by Debra Driza in my library's ebook collection. Apparently it's also the first book in a series, and right off the bat, I'd suggest that if you like books like The Adoration of Jenna Fox, this one comes recommended. It's more of a thriller, though, with narrator Mila being hounded by internal visions on the one hand, and by actual physical dangers on the other, and throughout it all is the underlying force driving her to find out who she really is. Who can she trust, and can she really trust anyone? When a book sets up that question, it always ramps up the tension. I don't want to ruin the plot with spoilers, so I'll leave it there. While I did feel there were a few weaknesses in the writing, it's an enjoyable premise with a ton of potential for the future volumes in the series.

You can find Mila 2.0 by Debra Driza online, or at an independent bookstore near you! 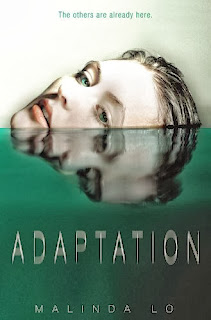 I'd been looking forward to reading Adaptation by Malinda Lo for a long time, ever since she handed me a postcard for it at an author event at Books Inc. in San Francisco. This summer I finally bought the ebook version (yep, I've been reading a lot of ebooks...but not exclusively) and was not disappointed. Fun and suspenseful sci-fi tropes abound: mysterious bird deaths, plane crashes, medical experiments, military quarantines, Area 51, conspiracy theories. If you like X-Files style, supernaturally creepy, suspense/thriller plots, you'll want to pick this one up. There's even a touch of romance, with main character Reese Holloway torn between longtime crush David Li and the strangely compelling Amber Gray. I look forward to reading the sequel, Inheritance, which is, in fact, already out.

You can find Adaptation by Malinda Lo online, or at an independent bookstore near you!
Posted by Sarah Stevenson at 6:41 PM
Labels: AF, Fantasy/Sci-Fi, Guy Appeal, Post-Apocalypse Fiction, Reviews, Romance, Suspense

I really liked Partials, too (and to a lesser extent Fragments). Just added Mila 2.0 to my "books I'm interested in" list. Adaptation I enjoyed, too, though I haven't gotten to the sequel...

Brave of you to catch up on these!

Agreed--I ended up enjoying Partials a lot more than I thought I might.

I really tried to let myself off the hook in terms of catching up on old reviews, but it turned out there were some books I still wanted to mention. So I figured I'll just do those how I want, when I want, and hopefully I'll eventually get more on top of things!

I don't know how I missed Partials! It sounds right up my alley. I'm sure it's buried on my extremely long TBR list. Sigh. I will look for it.