Yes, as a matter of fact, I do tend to read escapist books when I'm feeling overwhelmed by work, thank you very much.

Uh, and also when I'm not overwhelmed. Which is why I'm still working through my backlog... Today, quick reviews of two fantasy titles I read during the late summer/early fall. Not an exhaustive list (I also read, for instance, The Runaway King, which was already ably reviewed by Tanita, which lets ME off the hook) but two I found worth noting and sharing. Both of them were found at my library this time. 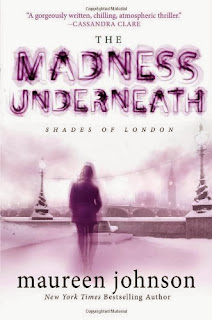 The Madness Underneath (I ADORE that title) is the second book in Maureen Johnson's Shades of London series and sequel to The Name of the Star (reviewed here). This series has lots of things I like reading about: Murder mysteries! Ghosts! London! Secret agencies! Jack the Ripper! Creepy buildings built on top of other creepy buildings! In light of the fact that I just re-watched Ghostbusters a few nights ago, I guess this type of book is right up my alley. Book 2 continues Rory's adventures in the world of ghosts and ghost hunting, with yet another set of mysterious murders for her and her friends to investigate, just as she's recovered from her near-death experiences in the first book. A suspenseful follow-up to the first book, and I look forward to reading more volumes. Just the kind of book to curl up with on a gray, blustery October night...

You can find The Madness Underneath by Maureen Johnson online, or at an independent bookstore near you! 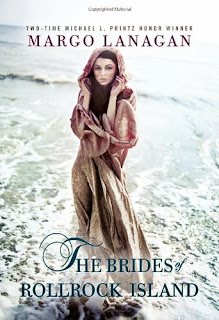 Whether it's short stories like those in Red Spikes (reviewed here) or novel-length stories like Tender Morsels (reviewed here), Margo Lanagan has a talent, in my opinion, for writing dark, disturbing, gripping tales that would make good crossover adult titles. The Brides of Rollrock Island is no exception. And, as with her other books, the writing is visceral, vivid and exquisite, almost painfully so at times. This one takes the selkie myth--the old British/Celtic folklore about seal-people--and weaves a story that is decidedly NOT a nice fairy tale. On remote Rollrock Island, taking a seal-wife for a bride has become a way of life for generations, and not in a particularly good way. Certainly not for the few remaining human women, not for the seal-wives, who pine for the sea, and not even for the men so charmed by their lovely wives. Yet everyone is caught in a damaging cycle, and all thanks to the witch Misskaella. Yeah, the lesson is don't be a jerk to the witch-lady, but it's more complicated than that; even the witch has her own unhappiness. Difficult to read sometimes because it doesn't seem like it can end well, this book nevertheless does contain hope, because there is always hope, even when it seems like there's no escape.

You can find The Brides of Rollrock Island by Margo Lanagan online, or at an independent bookstore near you!
Posted by Sarah Stevenson at 8:23 PM
Labels: AF, Bradbury Season: October Country, Fantasy/Sci-Fi, Magical Realism, Mystery, Reviews

Ooh, "The Brides of Rollrock Island" sounds delicious. That would be perfect reading for Halloween weekend. I'll have to check it out. I'm new here in the book blogosphere, and though I've lurked around your site for a while, I haven't commented before. I'm excited to stop lurking and be more proactive about taking part in conversations about books. Thanks for your recommendations in this post!

Thank you so much for stopping by and "delurking"! :) I need to get more active again in comments and conversations myself.

If you end up reading it, feel free to come back and let me know what you thought!