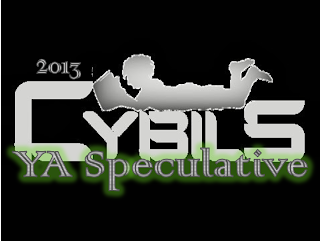 Throughout the blogging year, I run across books, hear about books, and see catalogue titles roll by that I think, "Hm, I'll see that again during the Cybils." I'm always surprised when what I read doesn't end up on the list. What, I think to myself, have I been reading all year? Clearly, SpecFic is a deep, wide, and vast category, in which there are lots and lots and lots and lots and lots and LOTS of books. Of all the genre categories under the umbrella of YA lit, science fiction, fantasy, and speculative fiction are some of the most prolific goers.

I am not as organized and awesome as Charlotte, with her dual list of MG Speculative Fiction books yet to be nominated, but I sat down and tried to think just off the cuff of all the fab books published within the last year which I *expected* to see on the Cybils list. The ones from the Big 6 Publishers, the ones that had a lot of PR money and a lot of buzz behind them, the special indies I'd noted....

And, then I ran my list through the fancy-shiny new Cybils database (it ROCKS, Sheila. Seriously.) and wondered at how few of them were represented on Already Nominated list. Maybe I have some dates wrong - granted, it's a full-time and annoying job to make sure that all nominations fall within the right dates - but there are only eighty books nominated as of today (I'm typing this Monday afternoon), and I find myself a little surprised. Either the speculative fiction category this year has too many fab books from which to choose, or there's been a lot of buzz, and not a lot of belief from the reading public.

This is not to say that there isn't a NICE grab bag of books already nominated. Especially if you're an Indie Author, check it out. It's okay to nominate yourself or a friend if the book falls between the right dates, and is in the right genre. As for the rest of us, who tend to wait until the last possible moment... I hope this list provides some help and direction? Some memory nudges? SEVEN DAYS until nominations close!

Posted by tanita✿davis at 1:38 AM
Labels: Cybils News, Fantasy/Sci-Fi

It's not just you! I keep thinking of books published this year that I expected to be on the list that aren't. You hit a lot of them, but I don't think you have Fire & Ash by Jonathan Maberry, The Final Descent (Monstrumologist) by Rick Yancey or SYLO by D.J. MacHale.

Oh, The Runaway King was nominated; it's in the Elementary/Middle-Grade Spec Fic category.

The MG is going to keep throwing me. I read WAKE UP MISSING, and it was freeeeeaky. But, it's technically MG, just WAY scarier than I usually come across for them. But, excellent, and I hope it's been nominated already!

There are SOOOO many wonderful books. I'm constantly floored by what a vast category this is.

I was just thinking the same thing! There are a lot of books on my shelves that I expected to see nominated. Yet they aren't on the list yet! Mind if I link to this list from my blog?

I LOVED Relativity, tried to nominate it but it said it had been nominated in 2012, I think? Sadness :(

I'm a little gutted not to go into the Cybils with a Karen Healey novel in my bag. This is really an UNUSUAL year so far.

I kind of am scared to look at what we have nominated; I'm afraid I don't recognize ANY of it.