I read Tamora Pierce's MELTING STONES earlier this year, and THE WILL OF THE EMPRESS before that, but hadn't reviewed either yet. MELTING STONES was decidedly MG, with a twelve-year-old protagonist I'd not really met before, and while it was interesting enough, it had a few slightly confusing elements in it - one was a WAR that it talked about, and I thought, "How did I miss a whole war??" The second was the presence of a mountain spirit, Luvo, from... somewhere. Have I just missed that guy in the Winding Circle books before? I wondered. No, I realize now: his genesis is in BATTLE MAGIC, which was just released this year, as is the war... I'm not missing a book or my brain, after all.

There's probably a good deal of flack the author is getting over this book, which was eight years in the making - 1, to choose to just have a character appear with no backstory in a previous book, and 2, to write a novel in which "nothing much" happens but battles, but two things will help you understand that choice: One, something AWFUL happens to one of the characters in BATTLE MAGIC; since you read the sequel first, you know that she recovers. In its own way, that's reassuring. Two, this book is dedicated to veterans... and who hasn't heard the description of war as being a lot of waiting around, and then five minutes of abject terror? I think this book maybe reflects a reality the author has heard from other fans and friends. Nothing much has to happen, when the young character is realizing that she's in a kill or be killed situation - and all of her carefulness, politeness, and ability means nothing when confronted with overpowering greed, ego, and evil. Once the worst happens, she agonizes over it - and the past returns again, and again, and again, and again. That's a little too real for some people, yes, but one of the things we respect Tamora Pierce for is her ability to reweave reality into fantasy and back. War, violence, moral and ethical choices and PTSD is how it rolls for too many veterans; well done for Tamora Pierce getting the painful, boring, agonized bits right.

Concerning Character: While the other members of the Winding Circle temple, and their "students" are doing their own things in Emelan, original street thief, now a full Winding Circle plant mage, Briar, his mentor, fellow plant mage and Living Circle Dedicate Rosethorn, and Briar's new rock mage intern, twelve-year-old Evvy are off to the kingdom of Gyongxe to find out what they can about the origins of Evvy's magic, visit the little God-King of the first Living Circle temple, and, after that, the famed gardens of the imperial palace at Yanjing. 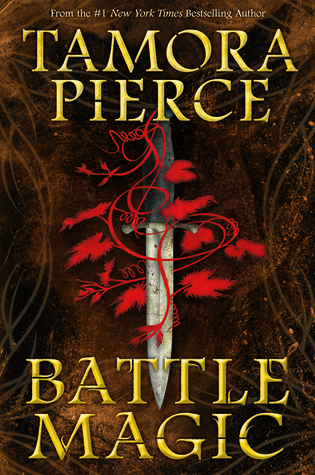 As always, Pierce does not disappoint in description of countries, faiths, temples, and the like. You might not be able to pronounce Gyongxe, but you'll surely want to GO after reading about the high mountains and the spare and majestic scenery and the freakishly close presence of gods of all sorts. If you're a wise traveler to these parts, you'll want to avoid the imperial palace and Yanjing, however - after witnessing the truth of absolute power corrupting, beginning with a warrior the emperor keeps on a leash like a pet, and concluding with him killing all the rose gardeners and trying to destroy a rosebush for having the temerity to get a fungal rot on the day the Dedicate visits, you know the Emperor's not dealing with a full deck... and, while the mages and intern mage are in town, he decides to go after the God-King's lands in Gyongxe, assuming that once he has done so, that he will have, be, and own EVERYTHING.

Obviously, Rosethorn can't let this stand - part of being a Dedicate of the Winding Circle temple is that you put the temple first. She tries to leave Briar and Evvy behind to return to the first temple to warn them - but they're not about to be left. The three mages find themselves using their talents in defending the young God-King's lands, but through misfortune and miscalculation, tragedy strikes. In this novel the greatest of losses - that of innocence - happen, but the greatest gifts - friendship - are given in return.

This is a novel in which moral and political decisions take center stage. A lot of what is done is hard - and really, the thematic question becomes about what we use our "power" for - and what we do with our abilities. These aren't easy questions, and the incidents that take place in this book aren't easy, either. Painfully and eventually, however. things begins to balance out. It is much like life.

WARNING: This book will make you long for travel, warm blankets, and possibly tissues. Do not read while operating heavy machinery. War is hell. No, seriously. Reading will reveal things to you that sometimes you aren't sure you wanted to know. Your mileage may vary. The cover shows, on an earth-toned background, a single dagger and red vining plants, which is probably representative of how the war was fought. Magical cloth bags of seeds are dangerous things. Sometimes, it's a good thing that fantasy isn't real.


I received this book compliments of Scholastic Books and NetGalley. You can find BATTLE MAGIC by Tamora Pierce online, or at an independent bookstore near you!

I'm always excited about a new Tamora Pierce. I just found this one at the library yesterday--it's waiting for me as a reward for finishing my edits...