Saffron on the Seven Seas 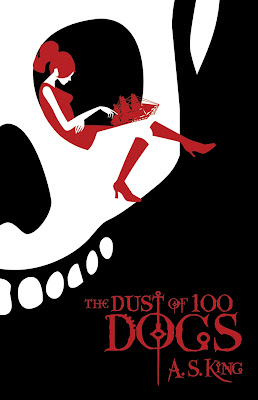 It starts with a death.

No, really. Swashbuckling pirate Emer Morrisey, just moments away from giving up the pirating life and retiring with a treasure and a love with whom she's only just been reunited, is having the worst luck. The man she's been running from has just killed her one true love, and now... her. She dies, sadly covered with... dog hair. She's been cursed, and not just with fleas. It's the Dust of 100 Dogs, and she's now doomed to live out her life ...as a dog.

How on earth did Emer become a pirate? That question is one of the three main story strands, which takes the reader through Emer's childhood, to the day she ...er, dies on the beach in what would be Jamaica. The second storyline is her life with her aunt and uncle, until she is sent to France. The most contemporary storyline takes place in the 70's, as Emer -- now called Saffron -- has to be bored through babyhood and childhood before she can get on back to her treasure and her independence. Meanwhile, there's... high school. And her really disturbing parents. And hormones and emotions and a whole lot of homework.

The scenes of 17th century Europe are gritty and realistic. Emer is treated like chattel, which is what most women were during that time. The pirate are adventurous, the stuff of tall tales and myth, where Emer wins every time -- until she gets lazy. This is a completely original, crazy story that will suck you in and hold onto you.

Also, this book is practical! Should you ever want a puppy, there are tons of cool dog taming trick in here -- after all, Emer was a dog, she knows from what she speaks!

While The Dust of 100 Dogs has a cool cover and is gripping and fantastically entertaining, I'm left with a couple of questions -- mainly, why the dust of 100 Dogs? Where'd it come from? Why didn't anyone use magic against Emer before then? Why did the first mate curse Emer, when she didn't even know who he was? (Why was he so loyal to the Frenchman when he was dying, when loyalty didn't seem to be all that common amongst pirates?) Why did everyone else age in the present day, and only she is eighteen? How many lives did they have? Were they all dogs?

These are trifling little questions compared to the scope and sweep of the story. This is A.S. King's first book, and it's a zinger. Check it out, and you'll be soon asking for more.

This one sounds really good. I just carved a pirate-faced pumpkin so I'm in a pirate mood. :)

Ooh, talent! This book definitely goes with the pirate pumpkin. Just make sure and poke out its right eye... trust me on this!

Why did the first mate curse Emer, when she didn't even know who he was? Why was he so loyal to the Frenchman when he was dying, when loyalty didn't seem to be all that common amongst pirates?

She didn't know who he was, but he knew perfectly well who she was. The women who stole the heart of his lover, the Frenchmen. The first mate knew that the Frenchmen was obsessed with Emer. I'm sure he heard it over and over again. And he was jealous that Emer had the Frenchmen's attention so throughly.