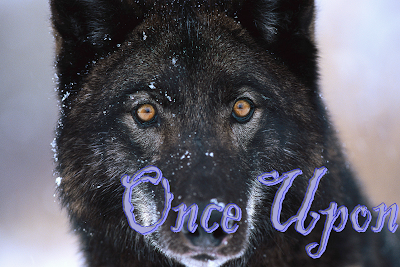 A couple of years ago, I was really excited to meet Our Jane Yolen in person. Okay, yes, I didn't actually meet her; I stood next to her in a hallway while we sipped tea and sat in the row behind her at a conference, but I was this close to saying hello. Anyway, I admire her greatly as a writer, but why I refer to her as Our Lady, Jane, is because of her poetry, which generally contrives to smack me right between the eyes with a small silver hammer called Truth.

I've posted this poem before, but especially now, in the thick of election furor and angst, in the days when acrimony and hope war side by side, it's time to share it, gratefully, again (and since it was passed out at the conference on bookmarks, I am sharing it in full). Let it smack you with that hammer, set you thinking and being and doing. May you see the Other in all your tales in a truer way.

Once Upon A Time
there was a Wolf,
but not a Wolf,
an Other
whose mother
and father were others,
who looked not like us,
Republican or Dem
in other words--
Them.
They were forest dwellers,
child sellers,
meat eaters,
wife beaters,
idol makers
oath breakers --
in other words, Wolf.
So Happy Ever After means
we kill the Wolf,
spill his blood,
knock him out,
bury him in mud,
make him dance
in red hot shoes.
For us to win
The Wolf must lose.
Poetry Friday is hosted today by its creator, the one and only Kelly@BigA, little a.
Posted by tanita✿davis at 5:44 AM
Labels: Poetry Friday, Views

Zing! All animals are equal, but some are more equal than others....

Whoa. I'll be thinking about this one for a while...

I don't know why, but the phrase "You're either with us or you're with the Wolf" just entered into my head.

Thanks for the poem, and the perspective. There are Wolves out there.

Whoa, I echo the zing. Thanks for that. Powerful.

Wow. Never read this one before. You're right, it does smack you between the eyes. Fabulous!

I LOVE this. Thank you for posting it now, with the air thick with wolf-talk.

For some reason it reminds me of a piece on NPR last night about political ads. Two men who do voices for the ads were interviewed, and practiced saying certain phrases in a way that made them sound super-evil -- or wolf-like.

I have a Yolen poem on a bookmark, but it's not this one. This one? Knocks me down. Is there an illustration on the bookmark?

How cool to get to be so close to Our Lady, Jane! That is a wonderful poem.

I heard that piece on NPR about the polical ad voice actors too, while I was cooking dinner last night. Their blase attitude gave me a real chill! The way they didn't seem to mind filling the air with fear and doom in order to bring home the $...

I remember this one! Great time to bring it back out.

I'll have to look for that NPR program. Sounds fascinating (and a bit distressing).

So, guys, as a rule I don't write a lot of poetry (or, at least, I haven't since the bad old days). But I'm trying something new for Poetry Friday, a brainstorm that occurred to me while driving around yesterday: a Twitterpoem. I'm sure I'm not the first one to think of this idea, but I did think of it all by myself.

So, if you check out my latest Twitter post (marked #Twitterpoem) you'll find the inaugural edition. I'd like to try to post more of these from time to time, as inspiration strikes. Generally, I get struck with a line or two rather than an entire poem, so I thought this would be a fun way to share them.

(As you can see, I'm being wimpy about this and burying it in the comments...but feel free to join me in the creation of Twitterpoems!)

Sara: No illustration; I thought the black wolf, with his intense eyes, went well...

Whump! That's the sound of me being smacked. Thanks for the deceptively simple poem. Truth doesn't need to be complicated all the time...

This is wonderful and strikes me perfectly with some of the wolf stuff I've written about in recent months.

Did you see the front page of the WaPo today? The Bush Admin is trying to delist the Gray Wolf from the endangered species list again in the Lower 48.

Wolves = evil just will not go away.

I just finished HERE LIES ARTHUR by Phillip Reeves and hearing echoes that book in this poem.

Election season has been downgraded to reality tv!