Each month our writing group has Craft Chats, where we read a few articles and discuss the craft of fiction. Aquafortis last night came up with a great discussion starter on dialogue, and we debated the merits of dialogue as an indicator of cultural, ethnic and racial identification.

I disagreed strongly with one article's premise that dialectal English is a positive way to convey ethnicity. While I'm not a fan of the foodie descriptors -- the mocha-caramel-chocolate-cinnamon skin/eye combination -- I'm also not a fan of the "Fraulein, vee haf vays of makingt you talk!" school of dialogue, either. People may feel comfortable with exaggerating the characteristic accents of their own culture, but it seems like a cheap shortcut most of the time, and is a slippery slope to caricature and stereotyping.

Of course, if all of one's characters are written to reflect the dominant culture, this perhaps need never be an issue... Or, maybe, as is being discussed at the Fire Escape authors maybe shouldn't describe race at all.

Most writers describe race if a person is nonwhite. Rarely do writers spend time discussing or describing a character of the dominant culture unless it's a romance/relationship/"chick lit" kind of thing, and it's deemed important for the reader in order to engage their imagination and allow them to insert themselves into the story. (Of course, a writer always wants this, but somehow, in romance there's just more description. Appealing to the physical, etc.) In young adult literature, class seems to be more closely described, and race is often left in the foodie stages. (Sure, sure, she's got mocha skin and long licorice lashes, but does she have an iPod and 7 Jeans?) Race, for some, is dismissed as an outmoded thing, a social construct that doesn't really have any meaning. After all, didn't Stephen Colbert already say that he doesn't see race? (Therefore no one does, right?) 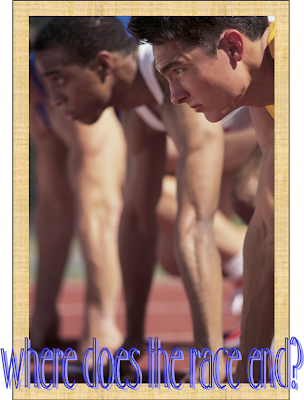 When a character's ethnicity isn't explicitly defined, can't a reader still identify with things about them, like their fashion sense, strength, or love of algebra? Is hoping that readers will identify with a character simply because they are described as being of a particular ethnicity, racist? Or are you offering your reader a representation with which to identify?

From the writer's point of view, it's been strange to write -- to be honest, the character of Lainey was meant to be biracial, but I was discouraged from this. Another manuscript featured a Caucasian male, which was shocking to a few people, and eventually I was asked to rework that novel entirely. I may, someday. (Or not.) My recent WIP has a character with AFOs -- ankle/foot orthosis -- and crutches. A member of my writing group suggested that I add more description because it wasn't apparent what the character looked like. At the time, the comment didn't strike me as strangely as it did later on. Once again, I'm afraid that I am not, as a fellow MFA'er once told me, "representing" properly.

A commenter at Mitali's blog sagely remarked that "show, don't tell" is always the most important rule, but how, really, do we show race? Or can we? Saying that race doesn't matter doesn't equate with treating people equally, nor does it erase the desire of many readers to know who they're dealing with.

But...why is that?
Why does it matter?
Are we trying to identify? Or differentiate?
Posted by tanita✿davis at 5:57 AM
Labels: Ethnicity and YA Literature, Views

Ah, dialect. When it works, it really works (i.e. The Color Purple and The Grapes of Wrath), but when it doesn't, I just want to throw the book against the wall. I just went to my Heath Anthology to reread the Zora Neale Hurston short stories there ("Sweat," and "The Gilded Six-Bit").... when I read them in college, the dialect tripped me up, but 15 years must have had some mellowing influence, because it works for me now. I think Cold Sassy Tree didn't have dialect, but I think the main character said something to the effect of, "This is how we pronounce some words in the South, and I'm not going to spell them how we pronounce them.

By the way, I never made the connection between skin-tone and caffeinated beverages until you pointed it out. (My own skin is the color of cambric tea, ha ha.)

I have no wisdom to add here, but wow that is one interesting discussion. It's making me think and think.

This comes up for me when describing secondary characters - I feel somewhat like I want to cast them like a Benneton Ad (remember those?) with a multicultural cast that's so very politically correct. Problem is, they're pretty much disposable and I keep running into the red shirt thing (the star trek extra who beams down to the planet with Captain Kirk and Doctor McCoy, only to be killed off within moments of transporting. You know, the expendable extra...) That was where a lot of the diversity of the future was shown. So I struggle with it - do I make them diverse, but then kill them off? Can I make them less than perfect, or do I risk offending? Ultimately, if we can't have them be somewhat flawed characters, I'm not sure why we'd want to write about them...
It's an important discussion, and I'm glad you brought it up.
I guess I don't have any conclusions as of yet, but it's something I've been working on figuring out.

Lee, you crack me up.
I remember one of the few times I watched F*R*I*E*N*D*S -- I marveled that they managed to find a monkey in New York city, but no racial diversity. I tend to run the other way and have the Benneton thing happening too -- very neatly even -- sure, let's have one of each, red and yellow, black and white! Whee!

This can be expanded to include GLBTQ characters... I've had parts of this conversation with Julie Anne Peters, on whether or not people who aren't gay should be writing gay characters. Do we go PC and make sure and include a character of every preference in our cast of thousands? Do we then end up with tons of gay sidekicks? Is that helpful to anyone!?

Questions, questions. And no real answers.