Behind the Facade: Paper Towns 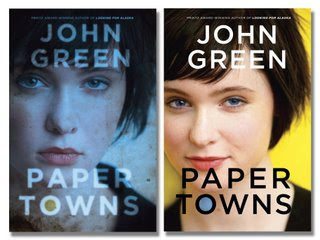 Sure, they've been friends since they were kids. But Margo has always been the instigator of schemes, the quasi-evil genius, and Quentin her loyal sidekick. Even that day when they were nine and they found the body in the park, Margo was the one to approach it. And now that they're seniors--even though Margo is undeniably a part of school lore, while Quentin is merely a nerdy footnote--Quentin finds himself drawn into Margo's orbit once again. But after a wild night of vengeful pranks and sneaking around public property with Margo, Quentin arrives at school to find that Margo has implemented the ultimate adventurous scheme.

Although Quentin's hero-worship is enough to make anybody exhausted, his two quirky and amusing best friends--the "honeybunny"-chasing Ben and the wiki-addicted Radar--are loyal enough to go along for the ride, and as a reader I was happy to ride along, too. Like John Green's other novels, Paper Towns layers humor with emotional depth and intellectual breadth, and doesn't talk down to teen readers.

I'm not even going to read your review. I'm so BITTERLY JEALOUS that you've actually read this already that I'm just going to sit and sulk.

Not to worry--the ARC is going into the "save for TadMack" pile!! Just a few more weeks, eh?

I loved this book. And i love your new header. :)