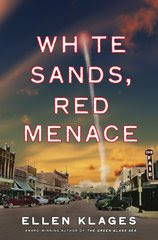 In this sequel to The Green Glass Sea, World War II has been over for half a year, and Dewey Kerrigan has unofficially become part of the Gordon family—with her father and grandmother dead and her mother an absent mystery, she's got nobody else. So she's got no choice but to move from the Hill in Los Alamos, New Mexico, where her father and the Gordons helped work on the "gadget" that ended the war, to Alamogordo, where they're trying to make a new life in the post-war years.

The first book took place against a much more overtly dramatic historical backdrop; White Sands, Red Menace deals with the quieter dramas of family and friendship. As Suze's father gets involved with a rocket-testing project, Suze's mother, Terry, becomes an activist working towards curtailing the use of the Bomb. The resulting tension isn't easy for Suze and Dewey, either, as they try to settle in to their new school in a new town.

But even as Suze and Dewey grow together, apart, and together again, they learn to be themselves as individuals—Dewey pursues her interests in math and science, and Suze develops her artistic skills; Dewey meets a boy, and Suze makes friends with a Mexican-American girl from the wrong side of the tracks; and they both learn that when it comes down to it, the meaning of family has nothing to do with biology.

As before, Ellen Klages wonderfully evokes the time period through her use of details of setting, atmosphere, and language, as well as through the more encompassing struggles that come out of being a strong intellectual woman during the late 1940s. White Sands, Red Menace will be out this month from Viking.

Buy this book from an independent bookstore near you!
Posted by Sarah Stevenson at 3:34 PM
Labels: AF, Historical Fiction, Reviews