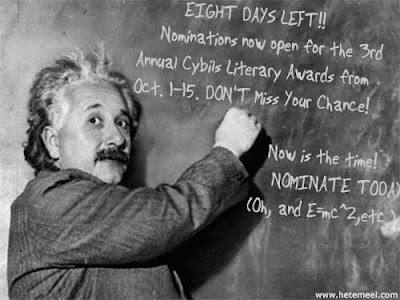 Ah, that Alfred. Loves a good book, that man. This is your Cybils Reminder! Things have changed this year, and the nomination time is quick-quick-short! One book per category, and it must be published in 2008. There, that's not so tough to remember, is it?

Via Book Moot, more Heroic Tales of the National Ambassador for Young People's Literature. Our man has finally gotten his medal -- which he will show to you if you even are on the same side of the street as he is -- and recently he went to Washington to ...fix things, and read bits from his autobiography, Knucklehead.

Operatives from both the Children’s Book Council and the Library of Congress had asked Ambassador Scieszka to perhaps refrain from reading certain chapters of Knucklehead. Chapters like the one titled Crossing Swords, a meditation on going to the bathroom with all five brothers, together, at the same time.

Ah, yes. Since he couldn't READ that piece, he described it. To the President. 'Cause he's that "funny dude," and he had a Job To Do.

Meanwhile, if you missed our man's Ambassadorial efforts last summer you must catch up.. Ambassador Jon -- blazing a trail for Young People's Literature and saving it from anything remotely approaching seriousness.

Many people know that Neil Gaiman has been touring for The Graveyard Book, and has been reading bits from it. You may also know that he's been reading a full chapter at each stop, and by the time he gets home, he will have read the whole book aloud. And now all chapters thus far are on video. You can listen to that delicious voice read and watch... *cough* Erm, yes, you can now watch Mr. Gaiman reading. Tip of the hat to SF Signal.
Posted by tanita✿davis at 3:52 AM
Labels: Random Notes and Errata, Views

Uh-oh, I know what videos are getting downloaded straight away...

Can't help it, that Einstein image just cracks me up.

I just saw Ambassador Scieszka this morning! He's on tour for Knuckleheads. A couple hundred kids were there, and he had them giggling in the aisles.

I love the picture! Where did you find it at. Thanks for the reminder. I really need to get over there.

Thanks for the heads up on Gaiman. I loved the Graveyard, its being passed around the store now.