Toon Thursday: Behind the Scenes

Okay, so this is really a shameless attempt to cover up the fact that I don't have a new cartoon to post today. Truly, I tried. And I did in fact start a toon--but then once I finished the underdrawing I decided I didn't like it enough to post it. Crap on a cracker.

Instead, I thought I'd post my unfinished sketch for you in the context of a little behind-the-scenes look at what happens when I make a Toon Thursday.

1. The Concept. Usually while driving around running errands, I come up with an idea. If I'm particularly inspired, something I encountered on the web or the news that week might serve as my subject matter. If not, I try to milk old ideas like the never-ending series "Common Species of the Literary World." 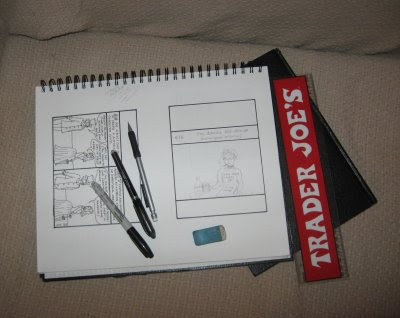 2. The Supplies. My supplies for these are really ghetto. If I'm doing a formal project, I might bust out my set of Rapidograph technical pens, the Speedball dip pen with its set of nibs, or even the bamboo reed pen. For Toon Thursday, as you can see, I have a sketchbook, a mechanical pencil, an eraser, a black Uniball Micro, a Sharpie, and a cheap plastic ruler (so I don't get Sharpie on our nice metal rulers). Oh, and the couch. 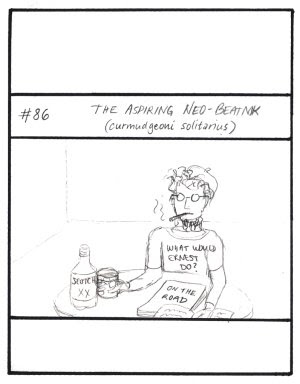 3. The Sketch. First I draw the rectangle which the cartoon will occupy, in pencil. I divide it into any necessary compartments, and then I ink it in with a Sharpie. This can be seen at right in my rejected cartoon for this week. Then I pencil in the interior text and drawing, and ink that in with the Uniball and sometimes a finer-point Sharpie. Then I use the eraser to erase the pencil. Often, at this stage, I forget to sign the cartoon.

4. The Final Product. The last step is to scan the cartoon into an image-editing program--for this purpose I use the user-friendly and less memory-hungry GIMP rather than Photoshop. In the GIMP, I add header text, sometimes my initials and the date, and then use color, pattern, and gradient fills of various types to color everything in. At the end, it looks like the Toon Thursday you know and love. 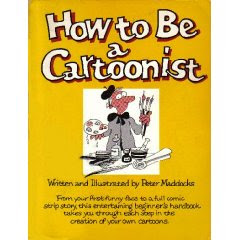 5. Resources. I would be remiss if I didn't acknowledge the years and years of doodling and noodling I did as a result of a book my mom bought me when I was about ten entitled How to Be a Cartoonist (right). I really did want to be a cartoonist for a while, and I have been, to some small extent, in various voluntary capacities. Little did I dream of that, back in the days when I drew Garfield and Odie all over my notebooks, or later, Bill the Cat and Opus (or, earlier, my own cartoon character, Dork the Duck).

Posted by Sarah Stevenson at 9:09 PM
Labels: AF, Toon Thursday, Views, What We Do

Thanks for letting us peer over your shoulder!

Now, how about a "My Manuscript is Crap on a Cracker" toon?

This really is the coolest thing, although I must admit that "crap on a cracker" has to be one of the more distressing turns of phrase... somehow bringing to mind parrots and other disturbing imagery...

Thanks, likewise, for letting me weasel out of this week's cartoon! :)

There's a story behind "crap on a cracker." It dates back to when Rob and I were studying at the San Francisco Art Institute. In the printmaking studio there, in the back room with all the storage drawers and screenprinting stuff, written WAY HIGH UP on the white-painted wall--and this is a high-ceilinged room--in little black-markered letters were the words "crap on a cracker." It was a great mystery, how those words got there...who...why. A rather entertaining mystery.