Toon Thursday: Of Course I'm Not Talking About Myself Here... 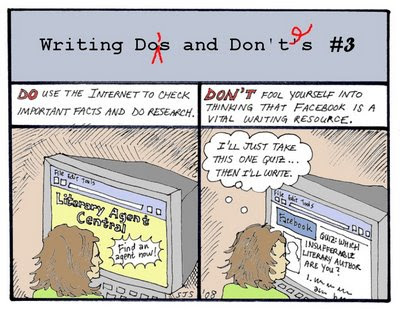 I'm a little worried about this, but I think I'm going to have to post re-run Toon Thursdays for the next two weeks, because I'll be out of town. I promise to pick truly awesome ones to re-post so that you don't lose interest completely and leave me for another writing-related cartoon.

What will I be doing for two whole weeks? Well, next week I'll be in Seattle for a friend's wedding, which is next Saturday. However, I'm also very excited about getting together with Alkelda and Jackie and possibly even Colleen for an informal kidlit drink evening. And I promise, I won't be shy about posting pictures. However, judging from previous encounters, Alkelda might have that covered! :)

Just a couple of links today. I recently received an e-mail about a new site called BookVote, which is a social bookmarking site specifically geared towards sharing writing and book info. If you're interested in sharing great links (and giving the thumbs-up or thumbs-down on others' shared links), it sounds like a great project.

In the latest SCBWI e-mail newsletter, I casually read an item that referred to a fun little contest called the National Geographic Children's Books Planetary Mnemonic Contest. Said the newsletter item, "National Geographic Children's Books created the contest in response to the recent announcement by the scientific community that there are now 11 recognized planets -- Mercury, Venus, Earth, Mars, Ceres, Jupiter, Saturn, Uranus, Neptune, Pluto and Eris. Pluto, Ceres and Eris are considered dwarf planets." Is it just me asking, "Ceres? Eris?? Duhhh, when did that happen?" Anyway, methinks it's cool, though Eris seems a bit scary for a planetoid name...like it's going to break orbit, cruise by, and drop apples of discord on us.

Hey, you, Colleen and Jackie had better start thinking about what you want on the super-duper blogger video, or it'll just be a bunch of us giggling and swilling mojitos.

And that's bad why...? :) I'll try to think of something fun we can do. Maybe we should have lightning-round book debates...

Man, those scientists are sneaky! We had a big brouhaha about downgrading poor Pluto, and now its been re-listed with two other upstarts? This shall not be borne! The apples of discord are falling already!

A.Fortis: Yes! Book debates. Only, please, let's make sure we've all read the books beforehand. I've read a bunch of YA, but not as much as you and the others.

By the way, Margaret Mahy's The Changeover rocked my world when I was a teenager. Why oh why is it out of print?