Hide for Your Life... 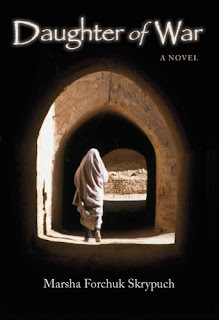 I find almost every story about the Armenian genocide almost impossibly painful to read. Still, Marsha Forchuk Skrypuch's fictional account Daughter of War brings humanity, love, and hope into a story that is, at the same time, dark, painful, and horrific.

When the story begins, Marta has been living in the home of a Muslim, given refuge but also forced into the status of inferior wife. Upon finding out Marta is pregnant, the elder wife bundles Marta into a cart, bound who knows where. Meanwhile, Marta's love from before the "deportations," Kevork, is working as a cobbler, disguised as an Arab. Neither has any idea whether the other is even still alive.

But they maintain hope, somehow--and both end up fighting the injustice of their society as best they can. Marta returns to the orphanage where she lived as a child, hoping to find refuge during her pregnancy, and ends up helping other orphaned children; Kevork begins a difficult odyssey as a messenger for those resisting the government. This is a story filled with both excruciating historical detail and no-holds-barred emotion--at times disturbing, but it's a story that needs to be told, with an ultimately uplifting ending.

Wow! Thanks so much for the lovely review!

Thanks for stopping by the blog! We're always so happy to see authors make an appearance in our little corner of the internet.