Youth and age. Big and Small. Black and White. Heavy and Light. The opposing ends of any given spectrum become obvious to us early on, as the difference between on and off, yes and no, stop and go are introduced to us before preschool. 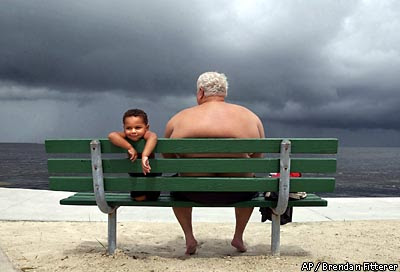 It's less easy to understand when we encounter shades of gray, things that don't belong so sharply divided. It's having my eyes opened to degrees of right and wrong that so made the fiction of Chris Crutcher so impactive for me. And so my poems today are from both edges of the spectrum in multiple ways. The first poem I memorized in high school (and I don't think I entirely understood it at the time), the other I first discovered scrawled on a white board in a classroom, and it's struck me with such thoughtfulness that I wrote it for years on other white boards in empty classrooms, hoping that it encouraged someone else to think as I had.

When I was young and bold and strong,
Oh, right was right, and wrong was wrong!
My plume on high, my flag unfurled,
I rode away to right the world.
"Come out, you dogs, and fight!" said I,
And wept there was but once to die.

But I am old; and good and bad
Are woven in a crazy plaid.
I sit and say, "The world is so;
And he is wise who lets it go.
A battle lost, a battle won-
The difference is small, my son."

Inertia rides and riddles me;
The which is called Philosophy.

In Men Whom Men Condemn As Ill

Oh, I really love these both so much. Good and bad woven in a crazy plaid... Sometimes I yearn for the days when things felt more black and white than they do now...

I like these too. It bothers me when people act as if all of evil is embodied in one person or one group of people.

I am discovering that one of the great things about getting up to a "certain age" is you start to grow some sense. Grey can be good!

Thanks for these. I'll be reflecting on them today. I love that you wrote the second poem on other white boards.

Really nice combo of poems. I agree with cloudscome - it's a good thing to attain some perspective on things and realize nothing is so black-and-white.

Also, the photo is brilliant.

Ditto on the photo. You must really search and search for the perfect one.

Why does it not surprise me that you're a stealth poetry spreader?

I'm with Cloudscome. I have even gone past that "certain age." One does gain a different perspective through age and experience. I think some of us don't give up battling. I learned over the years which issues were important enough to confront and which issues to ignore.

I'm not usually into advice poems (for lack of a better term), but your delivery helped me like them: the great photo, the whiteboard anecdote, and the theme especially.

"A battle lost, a battle won-
the difference is small, my son."

I love the second poem.

You must have a huge collection of poetry you've saved over the years. Very cool.

I love the crazy plaid part, too - it's so wonderful. Excellent theme-based post, TadMack!