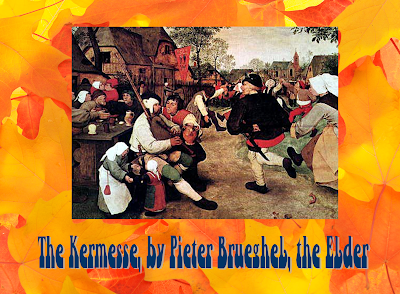 In Breughel's great picture, The Kermess,
the dancers go round, they go round and
around, the squeal and the blare and the
tweedle of bagpipes, a bugle and fiddles
tipping their bellies, (round as the thick-
sided glasses whose wash they impound)
their hips and their bellies off balance
to turn them. Kicking and rolling about
the Fair Grounds, swinging their butts, those
shanks must be sound to bear up under such
rollicking measures, prance as they dance
in Breughel's great picture, The Kermess

My love of this poet comes from my undergrad poetry professor, Dr. Isaac Johnson, who was at least six foot seven, thin, bespectacled, and dark. Though he looked like a ponderous professor, he sounded like Isaac Hayes; though his voice was soporific, his wit was razor sharp and quite dry. He read this poem in his sonorous voice with a irregularly measured cadence that suggested a strange but stately dance. Williams had a much higher voice, a much quicker cadence suggesting that the rollicking gallop is just on the verge of being out of control. The two stylings intersect perfectly to me as dance, just as the picture suggests.

The idea of dance appeals in a world where things have grown a bit dim as of late, and the mind is boggled and bedeviled by the ridiculous and the mundane. Lighten up and cha-cha over to ChatRabbit to see the most amazing dancing snowflake ever, made by the COMPLETELY fabulous Salley Mavor, who has truly provided me with a huge smile today. Visit the Robert's Snow: Blogging for a Cure Blog-a-thon organizers for the entire schedule of today's snowflakes. Then, celebrate at Big A little a for more poetic karma goodness. Happy Friday.
Posted by tanita✿davis at 5:56 AM
Labels: Poetry Friday, Views

This poem puts me right in the middle of that painting. I love the sly bit about "those shanks must be sound" and how the poem stumbles round and round, jerking a bit, just like the dance, coming back to "The Kermess" at the end.

On another note, I spent the better part of Sunday evening in front of the fire, reading Hobbits Abroad from the beginning. Since I've seen your flat, I understand your yearning for a fire, and at this time of year, family. I hope you and D. do get to do something fun for the holidays, even if it isn't at home.

Trust JC to find the absurd. I can hear Isaac's voice as I read this poem.

I like this little detail: "their hips and their bellies off balance
to turn them."

This is a new one to me, and I adore WCW. Thanks!

I'd never heard WCW's voice before, and the joy and amusement in his voice (and the fact that it was so much higher and freer than I'd imagined it, looking at his pictures), made me smile even more broadly than his mention of bellies and butts and shanks.

I'm so glad you posted this!

I love your description of your poetry professor. What a great poem!

What great physicality and sounds in this poem. Thanks for sharing!

I really enjoy the placement of rhyme in this poem- it certainly captures the dance doesn't it?

I hadn't read this one before! He's such a multitalented man with an amazing eye for the tiniest of visual details. When I found out he was a practicing doctor, I was floored.