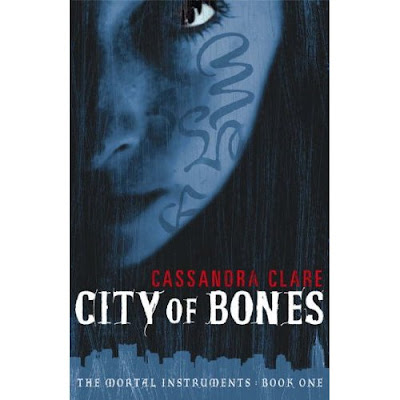 The first book in the Mortal Instruments series, City of Bones is a quirky, dark-humored book that hits the ground running. Under strobing lights in the all-ages club called Pandemonium, Clary Fray sees a murder in process -- two boys carrying knives going into a darkened storeroom after another boy. Horrified, she tells her best friend, Simon, to go for the police, and bravely - stupidly - heads for the storeroom herself. She witnesses a brutal killing, and though she tries to save the boy, she cannot. When his murdered boy seems to evaporate, she realizes she is in over her head. This realization further crystallizes when Simon comes crashing in with the police. Clary is shaken when no one else can see the murderers, who are smirking right in front of her -- nor the scene of the crime right in front of them -- nobody, that is, but her.

What is it when you can see things no one else can see? And why does the murderer keep turning up?

There is craziness afoot, and Clary wishes she could talk to her mother about it, but Mom's acting kind of crazy lately. She plans to yank Clary out of the city -- away from the art classes she's scrimped and saved to pay for -- to their farmhouse in the country, together with her friend Lucien, and the three of them are going to -- do what? Vacation? Hide? Why is her mother acting so weird?

When Clary receives a panicked phone call from her mother that tells her not to come home, she enters a world she never knew existed. Her mother's in danger, Lucian, the man who has been her mother's best friend as long as she can remember suddenly tells her he has not time for her. Clary's life is ripped apart. Who can she trust? Who was her mother running from? The answers will convince her that nothing will ever be the same.
Posted by tanita✿davis at 5:15 AM
Labels: Fantasy/Sci-Fi, Reviews