The Lolita Pippi: A Bridge Too Far 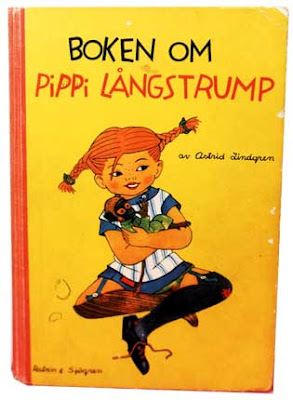 We kvetched earlier this year about Paddington being commercialized and other characters being cheapened by overexposure, but this one takes the cake.

According to Der Spiegel, the Pippi Longstocking character, once the possession of Astrid Lindgren, her creator who published her first adventure in 1945, has been commercialized to the extent that her heirs are in a constant court wrangle. From costumes to CD's to skin creams, the worst of the offenders is an Italian company which is reproducing the doll for this holiday season -- with a womanly figure and see-through panties.

Astrid Lindgren, who died in 2002, would have been 100 today.
Posted by tanita✿davis at 8:22 AM
Labels: Random Notes and Errata, Views

Blogger ate my comment. Obviously, I wrote about how wrong this was, but now I don't have my clever retort anymore.

On the bright side, the Swedish Embassy is celebrating Astrid Lindgren's birthday today with readings by Katherine Paterson and others. (See the Embassy of Sweden homepage for more.) And the Washington Post had a big article on a children's climbing wall at the Embassy, with a figure of Pippi scrambling up it. THAT'S the Pippi I know.

Well, see, Sara, this is why we keep you around. I'm reading gloomy German newspapers, and you're reading cheery Swedish ones. Brava!

Oh, that is just wrong. Ugh.