The Darker Side of Fairies 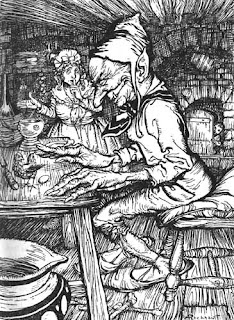 Just recently on Readers' Rants I had remarked on the surge in popularity of books with fairy themes or characters. Many of these explore the darker side of faerie, but that's nothing new, as I was reminded today by a fascinating essay in The Guardian by AS Byatt. Her article explores the more conflicted and even menacing side to some of the great artworks produced in the Victorian and Edwardian eras in England (featured in an exhibition at Dulwich Picture Gallery in London--making me wish I had money for another trip abroad...). Byatt points out that

The British, at the beginning of the 20th century, might be said to have been obsessed by childhood. A reviewer remarked that the great books of the time were arguably those written for children - by writers such as E Nesbit, Rudyard Kipling, JM Barrie and Kenneth Grahame. Children and childhood became very real and very important.

Nevertheless, there is a darker side to both the idea of fairies as well as the authors and artists themselves, and this article reveals some uncomfortable facts about JM Barrie, Kenneth Grahame, and other beloved children's authors--so beware. "The bright Edwardian nursery frieze can be seen with real goblins and greenteeths, wurricoes and strangling willows just visible behind the bright-cheeked children in their aprons with their nice apples and dolls." A deliciously written, fascinating essay. Thanks to Morfablog for the link.
Posted by Sarah Stevenson at 8:08 PM
Labels: AF, Views

Oh, cool! Maybe I can hop over to see the exhibit -- thought depends on how long its showing...