Grimm's tale of the twelve dancing princesses who escape into faery at the full moon is a familiar one. But it combined with the tale of the princess and the frog in Juliette Marillier's Wildwood Dancing creates a story with a slightly unexpected twist. 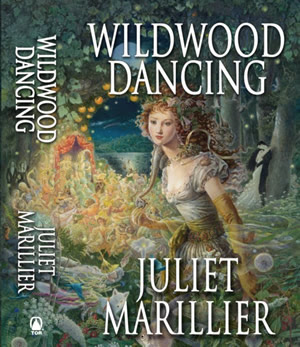 Set against the dramatic landscape of Transylvania, this tale of five Romanian sisters -- two beautiful, and two plain; one a brilliant scholar, the other practical and full of common sense, and their youngest sister is descriptive and engaging. The girls live in a land where strangeness is common - where Vlad is the name of a strange lordling across the valley, and they live in a house called Piscul Dracului. The dances in the wildwood are the girl's not-so-secret secret, and it would have been fine for it to remain secret, except that their father, who is in ill-health, must leave their icy valley for warmer climates. He leaves them to their own work, and under the oversight of their Uncle, who is a kindly man with great affection for them. Things are difficult but not impossible until the death of their uncle. Suddenly, their cousin, Cezar, is like a man possessed. Convinced that the girls cannot manage alone, he moves into their house, takes over their lives, and begins a campaign to destroy the wildwood.

Far and above the fairytale aspects of the wildwood, the interest in this tale is the scary sexism, the feelings of helplessness and the historical idea of a woman's lack of agency in the face of a man taking charge of things. Readers will cross their fingers for right to win -- and of course, it does.

And everyone lives happily ever after.
Posted by tanita✿davis at 5:40 AM
Labels: Fantasy/Sci-Fi, Reviews