Reader Gut Reaction: First, let me say only that I've already bought this entire series. Smashwords has it nicely for any ebook platform, and I still hope to see it someday in print. I've been impressed before with the quality of this author's writing - everyone in my Cybils group remembers me fiercely pounding on them to read AND ALL THE STARS, already - and I must admit this is more of a gush than a review.

Is this book - series - perfect? No. From a strictly objective point of view, it's a tiny bit long in spots, and could have been edited to have more action. But from my unobjective place, in the middle of the second book? It's like watching undiscovered episodes of your favorite SFF TV show - Stargate? Firefly? DS9? - and knowing that it will, in detail, hang on with the characters for a good long while. Happiness.

Sure, the stuff of nightmares that happens in plenty of stories, but the difference is that Cass walked from Earth through a rift in space to ...Elsewhere. An empty place full of strange, small animals, trees that are unfamiliar, a totally alien moon, and something that sounds like a land-dwelling and massive whale, calling...

The novel is told in the form of a journal, and by virtue of its first person voice, the survival portions are particularly horrifying - and riveting. Cass is sarcastic and dry by turns, and then terrified, and trying hard to hide it. Just the Wheel of Fortune escapades of trying to figure out which unfamiliar foods are good to eat - and the excruciating retelling of the time when she miscalculated - make the reader cringe slightly, and keep turning pages. Eventually, her time alone abruptly bumps into time with people - people from another place, whose language isn't even remotely understandable. And they take her away from the planet, which was once theirs, but abandoned, to their world, to their labs... and things start to get interesting.

The Setari are warriors, who have been fighting an endless battle against an increasingly wily opponent. Monsters - really, the memory of monsters - once came from between worlds into the place where Cass landed. They're still coming, and it seems like maybe, just maybe, Cass can do something about it.

Which means that they might never let her try and find home.

This is a novel of survival - with all that entails - a lot of crying, bleeding, dying, swearing, and living. It will work well for older teens and adults.

Recommended for Fans Of...: Gosh, I can't even find comparison novels. TV shows, more, like the aforementioned STARGATE or LOST IN SPACE. If you loved John Barnes' LOSERS IN SPACE like I did, though, you'll enjoy this. I read a preview review of Amie Kaufman's THESE BROKEN STARS - sounds like it'll be fab, and it's a bit like this. Of course, ACROSS THE UNIVERSE, Beth Revis, and GLOW, Amy Kathleen Ryan are also kind of on topic. 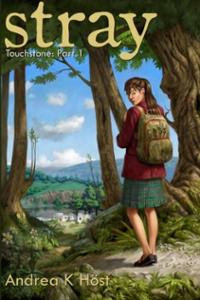 Cover Chatter: I like the polish of the photographic ebook cover, but I'm a sucker for a well-drawn book cover that shows that the designer or the artist actually read the book. Cass appears as she did in the book - in her skirt, impractical shoes, with nothing much in her school backpack, since it was the last day of finals, and her school uniform jacket. She looks quizzical, wary, and not too happy, and the non-Australian world of green, non-gum trees and fertile green hills stretches before her, in Where The Hell Am I-ville.

The ebook cover is polished and sharp, but it's pretty much a TV show version of who Cassandra Devlin might be. She's smoothly pretty, doesn't look like she accidentally walked into a random wormhole and nearly died, and seems gently unconcerned about the little spaces she's manipulating. It doesn't exactly reflect the first book, but more the series as a whole. I do like that the bubble... fills as the series progresses. A neat idea, and great detail.

Authorial Asides: You know I'm a big Höst fan - I really did nag my Cybils group about that book. (Forgive me, guys?) I couldn't find out much about her until I serendipitously stumbled upon an interview with her today at Novel Idea. Ta-dah! All you wanted to know about this Swedish-born Australian, her penchant for strong, practical heroines, and her affection for HOWL'S MOVING CASTLE, which automatically makes me happy. (Dame DWJ ftw!) I also found that, happily, readers avoiding iPads or other ereader platforms can find ALL of her books printed in paperback. Joy!


You can find STRAY and its sequels in the Touchstone Trilogy by Andrea K. Höst online, or ordered through an independent bookstore near you!

I read AND ALL THE STARS on your recommendation, Tanita, and I did enjoy it. Just picked up Stray, too. Thanks!

Maybe I should download one of these for my trip. They sound like my kind of thing.