"Remember, the only thing guys have that we don't just gets in the way on a bike."

Reader Gut Reaction: This book is not my usual style. Anyone who's met me knows I can trip just walking: so, so, so not a jock. But, I love this book. Flippin' LOVE IT. As for you people who can walk and chew gum at the same time, WHY am I not hearing about this book from you? I know the market is glutted with pink books for girls focusing on ... doing ... romance, but this is a book about doing something that breaks a sweat (technically, doing romance breaks a sweat, but ...eew. Don't distract me), a sport that doesn't come with a nature tie-in, neat boots, or a cute outfit - it's a BMX biking book, and I wanted to cheer at the last page, then go outside and get on a bike. As it took me, like, forever as a kid to figure out that whole balance thing even with a banana seat and backwards pedal braking (and don't look for me on skates anytime soon) we all know this would be disastrous, but the awesome thing is that the book gives you the feeling that falling down is okay - not fatal, and only an interruption in a potentially great ride.

Fast paced, emotionally resonant, and high speed action: this book will play well with guys and girls. The writing is clear and compelling - Josie Peters as a character is clear as day, and her hesitations, hurts, and victories make the text live and breathe.

Seriously, if you have any teen/tween girls around you - put this book into their hands. Read it yourself. It's powerfully motivating and it's about a girl who, through being ignored by her parents in favor of her sports-obsessed brother, ignored by her fellow bikers in favor of girls who will show more skin, or not upstage them, and ignored by professional sponsors in favor of the flashy hot male talent, learns to believe in herself.

Concerning Character: Josie's been a tagalong for a long while now. She tagged along with her older brother, Troy, when he went through his bike phase in junior high. Troy went on to baseball, and Josie stuck with his abandoned bike ramps, practicing on his old skate ramp when he got tired of it. Junior year, Josie scored a boyfriend who was a proficient biker - but who, right before prom, shook her up by just casually dumping her. Josie's kind of stunned - her whole world, that of being Sean's sidekick and having his bike friends be her friends - gone in a flash. And for what? Some girl with a pink bike and blonde hair, who doesn't even know how to ride? Having to start over with the whole friend thing... sucks. Having to find a date to prom at the last minute ...sucks. But, having to step from behind the shadow of being the sidekick to being the girl standing out front on the strength of her own skills... Well. That could suck. Or, it could be the best thing Josie ever did for herself.

In a sport where girls are considered "lucky" to make a trick, expected to wimp out if they fall and get a bruise, or God forbid, bleed, and where no one really cares if they compete - after all, there are the BOYS to have sponsors and competitions and awards - Josie decides that she just wants to get out there, and play. Less-than-subtle sexism, poor sportsmanship, injury, freaked out parents, an intimidated sometimes love interest - none of that, in the end, makes a difference. Through emotional ups and downs, Josie and her friends show how obsession, grit, determination, and a real competitive spirit can take you most of the way, but a network of supportive friends takes you all the way. 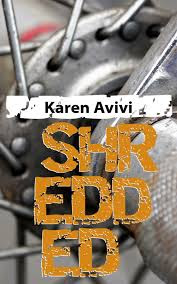 Recommended for Fans Of...: STOTANS!, IRON MAN and others by Chris Crutcher; SLAM! by Walter Dean Meyers DEFECT, Will Weaver; JUST ANOTHER HERO, Sharon Draper; tons of other sports novels where characters most of all go head-to-head with themselves.

Themes & Things: The sexism in a "boys" sport is right out there to see. But what's worse is the adults - the sexism in a parent letting a boy get beat up in football or baseball, but let a girl get a bruise? CALL THE AMBULANCE, OH, DEAR LORD, SHE MAY NEVER RECOVER. Because her beauty is damaged. Because her looks... are all she's got. That's the underlying message, even if that's not the message a parent intends to send. She can barely tell her mother she has no prom date, because Josie's mother has gone nuts over prom, and made a big deal out of a dress and all the trappings, as if that's all there is to Josie's life. Josie is treated differently from Troy, her new friends and fellow riders, Lauryn and Alexis called "daredevils," instead of "nice young ladies," as her other boy-obsessed friends are, and when she complains of this difference out loud, Josie's shut down and nearly sent from the table. It takes a lot for her parents to take her seriously as an athlete, and even in the end of the novel, when they're proud of what she's accomplished, the sense is there that they're still happiest with her advocacy work, and volunteering. Meh. You can't have everything. At least, not all at once. I get the feeling Josie goes the distance, and proves herself in the end.

Cover Chatter: It's a BIKE. It's got spokes and sprockets and a lack of pink, headless female torsos, preening male bodies, or anything that definitively puts it in one camp or another in terms of readership. YES!!!!!!!!!!!!!!! This is how you make a book look accessible. Thank you, book design team.


Publisher supplied copy. You can find SHREDDED by Karen Avivi online, or at an independent bookstore near you!

I don't generally gravitate towards sports books, either, but I like the sound of this one. And any book that empowers young women (and, apparently, adult ones, too) is a Good Thing.