As I noted on Monday, this week I'm doing two quicker reviews due to my complete swamptitude. (You like that made-up word? I think I'm going to incorporate it into my everyday vocabulary, since it describes my entire life nowadays.) Anyway, the book I'm reviewing today is a YA sci-fi jam-packed with adventure, action, and AI-related hijinks. Oh, and lots of explosions. 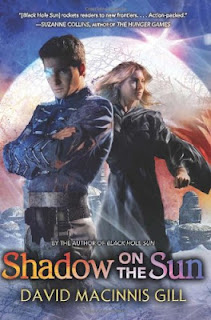 Shadow on the Sun is book 3 of David Macinnis Gill's action sci-fi trilogy set on Mars (Book 1 reviewed here; Book 2 reviewed here)—a future Mars ravaged by corporations, overrun by mercenaries, and ruled by a tyrant who just happens to be the estranged father of the protagonist, Durango. It's a really fun premise, and I'd gravitate towards reading these even if I wasn't a gigantic fan of all three songs referenced by the books' titles. The central overarching conflict in the trilogy is Durango vs. Evil Dad. By this third volume, his father Lyme has a chokehold on what's left of Mars society, and is determined to win his son over to his cause by persuasion or by force. But mostly by force. His father's got an army of loyal stormtroopers to do his bidding, and help him carry out his *mwa-ha-ha* Evil Plan to Conquer All Rebellious Parties. Of course, Durango has plenty of allies himself: Mimi, the loyal AI who lives inside his brain; Vienne, his fellow soldier, who is missing in action but still has his heart (figuratively, not literally); and a motley crew of semi-trustworthy mercenary types who could double-cross him at any time. If he can't stop his father, then who can? This volume wrapped up the trilogy in quite satisfactory fashion, with all the humor and sci-fi action I expected and a few fun twists thrown in.

You can find Shadow on the Sun by David Macinnis Gill online, or at an independent bookstore near you!
Posted by Sarah Stevenson at 8:30 AM
Labels: Adventure, AF, Dystopian, Fantasy/Sci-Fi, Guy Appeal, Reviews