TURNING PAGES: THE COLOR OF RAIN, by Cori McCarthy

I don't read a lot of realistic fiction, because reality - meh. Completely overrated. However, fiction well done provides links to reality, and this novel is, indeed, one of those which provides those links.

I'll be straight: it's not for the faint of heart. This is a novel best read by more mature readers - really mature readers - because the level of darkness is well able to drown even the the best night swimmer. This novel takes the present, and follows its underbelly of depravity into the logical future. It is, in some ways, ugly. It is the darkest book I've read all year, and it just kept gobsmacking me, as circumstances got worse, and worse, and worse.

Reader Gut Reaction: Yet, it's also a story that tells the true.

It's a story of hope - the faintest hue of it - because no matter how far you fall, when you don't give up, a survivor can claw her way back - or die trying.

Survivors don't come off well in this novel - they come off as narcissistic, in truth - "me and mine first and foremost" is indeed the way to survive, but it's lacking a certain humanity. Rain goes there, not surprisingly, but her return to a caring humanity happens more than once, and is, at times, slightly less convincing. Sometimes there's an emotional distance to the writing that tells me more about what the character is experiencing than shows me what she's feeling.

This cover blurb reads, "a no-holds barred action thriller." Well.... There is indeed action, but its being nonstop and thrilling seems a bit disingenuous to the unknowing reader, when the novel takes place mainly on a slave ship where young prostitutes are held hostage... not even sure where "action thriller" comes into that, but, I guess those words could double in marketing-speak for "edgy," "gritty" and "realistic." There's a lot of emotional confusion Rain feels for her circumstances throughout that I call Stockholm Syndrome, which others may call something else... romance. Her captor, indeed, is first described as merely mysterious, and "darkly sexy" by the author. It's a little confusing to me that there was additional romance in the novel; I found it unnecessary and kind of squicky, considering the circumstances, but I recognize more Stockholm Syndrome, and providing a hero with which she could ride off into a sunset, for those readers who need a HEA and a rosy sunset. I honestly felt that the novel would have been stronger without. This novel attempts to tackle some huge, huge themes - maybe too many of them to do any of them well. I found myself wondering repeatedly, "But what causes people to be Touched? How come nobody seems to have any answers?" Is this another way to talk about the lack of progress on Alzheimer's research? Is this just about the the spreading stain of human trafficking upon Western society? I really don't know, and the novel provides no clear answers. However, it has its supporters, who cheer on Rain as a indisputable heroine, who think the romance is hot and who read with less complicated, conflicted responses than I do, clearly. If you're a fan of realistic fiction with a repeated betrayals, danger, and horrific losses, all set against the background of deep space, this one is for you.

Concerning Character: Rain White has naturally red hair. She's a bright spot, a rarity, on a gray-and-ash colored, corporation-owned New Earth, where a disease called being Touched is rapidly turning the brains of friends and loved ones to mush, and then the Touched -- disappear. It's against the law to harbor them. There's no medical help - and certainly no time off of work. Rain's mother was taken, when she first showed the signs, and Rain's grief is tinged with rage, because her father did nothing. Only when they came for Jeremy, her brother who was helping to hide the neighbor in the basement, did her father act -- for all the good it did. Rain is now alone in the world, with Walker, her baby brother. Walker, whose hands shake, whose splitting headaches and periods of vagueness and amnesia tell her that the disease is progressing into dangerous stages. He's failing so fast. Soon, there will be nothing left of him. And then he, too, will be gone.

Some say there's hope, out beyond the Rim. The Mec's - mechanized human beings who have learned to better themselves with machine parts - invent, evolve, and survive. Outside of Earth, beyond Mars, Rain believes that there's no better place. She's scrimped and saved, and if she could only get them there, someone would be able to help Walker. Desperation mutes every voice in her head that says, "Go back! Too dangerous!" When approached by a young and handsome man to "bargain" for a place on his ship, Rain jumps at the chance. She vows to sell him her virginity, to be "his girl." There is nothing too dangerous to save her brother. No act too low. No price too high.

But, that was before Rain boarded his ship, the Imreas. Now, every time she thinks she's paid as much as she can - self respect, love, hope - the price climbs higher...

But, now she's met a Mec, and he seems to have all the answers. Rain's a survivor, and she can force herself to handle anything - but, does she have what it takes to save everyone? What price is too high to reach the Rim? 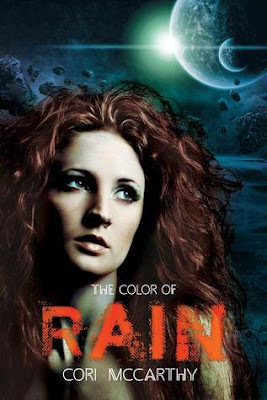 Themes & Things: Human trafficking. Prostitution. A seventeen-year-old protagonist? If you object to any of the above, you'll object more to finding out that according to the U.S. Department of Justice, human trafficking has become the second fastest growing criminal industry — just behind drug trafficking — with children accounting for roughly half of all victims. I read an article from January of this year that reports that the 2,515 cases currently under investigation in the U.S. in 2010, more than 1,000 involved children. As I said earlier, McCarthy takes a pernicious, ugly present, and extends it all the way to its horrifyingly realistic conclusion.

Cover Chatter: Though using a female's face, the cover details important features - Rain's hair is properly red, at least, and the sky depicts the darkness of the space she loves, though in a fairly generic way. While I think it does its job adequately, I found nothing of Rain as a character - her core of strength or survival - in the cover, and I kind of hope subsequent printings take a few more chances with the cover.


FTC:I received this book courtesy of the publisher; views are my own.

You can find THE COLOR OF RAIN by Cori McCarthy online, or at an independent bookstore near you!